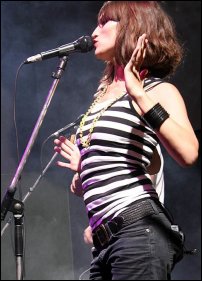 Recently on tour, promoting their first album “Galore”, I caught Dragonette at the Plaza. After checking them out online (their photos are amazing by the way) and listening to a couple of their tracks, I was hopeful that they would be better live. I don’t, not like them, but they’re not great. Lead Singer, Martina Sorbara started as a ‘Singer Songwriter gal’ and it’s easy to hear why. I love the timber of her voice. It’s so smooth and strong, really enjoyable. Her voice reminds me of Emily Haines from ‘Metric’ (as does their music) and Nina Personn’s from ‘The Cardigans’ – not bad company. Unfortunately however, I’d rather listen to The Cardigans and Metric than I would to Dragonette. Their electro pop provides nothing new, aside from maybe the great thought they put into their visual presentation, which in the end doesn’t carry the day. Dragonette is a decent band, with a decent sound – they definitely give ‘er, live, and they are all very nice to look at, but simply don’t quite cut it. They are just ok. I wouldn’t write them off completely after one album though, I have a feeling this band has the ability to evolve (Dan Kurtz did produce ‘Monarch’ one of Feist’s early albums) and if they hope to keep playing together, they better do so. After low sales Dragonette was dropped from Mercury Records in 2007 but still retains a deal with Universal. Their next album will give us an idea which direction this band might be headed…the curb? Or back on tour?

Ultimately, I’d rather listen to Metric.