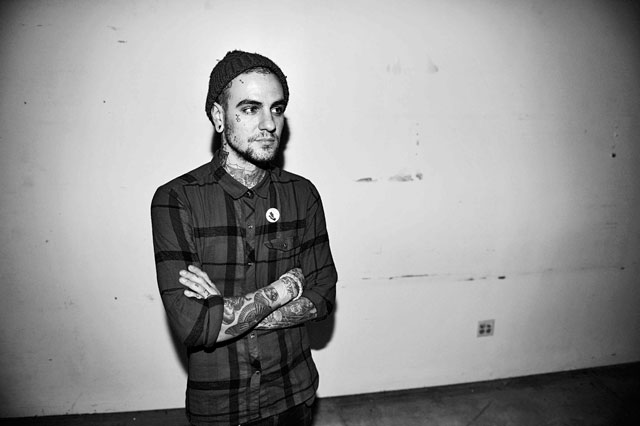 Fences is on everyone’s radar, and for good reason. It’s cause for attention when an artist writes dark lyrics and makes it sound poppy. The 27-year-old singer/songwriter, Chris Mansfield, is totally aware of this newfound fame, but it’s the kind of self-awareness that you don’t find too often. It’s fresh. Mansfield speaks candidly about what led him here. “It seems like when people are young and everyone is kind of deciding what they like, whether it was sports or skateboarding or just anything, I was always really into music,” he recalls. “Music was my initial rebellion to regular life and responsibility. But it got to a point where…it’s a classic thing…you enroll in art school or music school…and all of a sudden it’s not music anymore.”

He was thrown out of Berklee College of Music in Boston, MA, sold all of his music gear, and basically traded the old in for something new: an acoustic guitar. School hadn’t been the gratifying medium Mansfield so needed. He speaks about these heavier times, at the peak of his shift, and he’d sit in his car transcribing “Autumn Leaves” or playing “Blue Bossa,” an instrumental jazz composition by Kenny Dorham. Again, not emotionally satisfying. “It’s natural for everyone in their life to change,” Mansfield points out.

This month, Fences will be showcasing in Austin, TX for SXSW. The festival is notorious for featuring breakout artists aiming for the kind of street-cred that new bands drool over. Fences will be playing alongside veterans, City and Colour and Yeasayer, bands that Mansfield is a big fan of. “SXSW this year, for me, is sort of a dream,” he confesses. “I think we’re going to be able to make a real statement.” And others agree. Seattle’s City Arts Magazine ranked Fences at #6 in this month’s issue under “Best New Bands.” The fact is: 2011 is the year for Fences.

Mansfield admits the rawness of playing a packed house has yet to sink in. After all, this is a couple of decades in the making, for someone who’s been playing music their whole life.  “Last night I got to sing “Otherside” with Macklemore in front of twelve hundred kids. The kids were singing it so loud, and I could barely hear myself, and I started laughing. It was really awesome.” Chris recognizes that the kids who come out to these shows are in part thanks to radio play. He digs Seattle’s KEXP for their eclectic, live in-studio performances, but equally respects commercial radio airplay for circulating Fences over and over. For instance, their popular single, “Girls With Accents.”

“The beautiful thing about Fences is, it’s just everything about me musically. So I’m grateful to have this all encompassing outlet,” he says. That complete package was created with the help of the lovely and talented Sara Quin of Tegan & Sara. It was their creative similarity that brought Fences to life, and Mansfield credits her for helping him make it real. “She identified with the music even before considering getting the album together,” Mansfield explains. Quin co-produced Fences in 2010. In a living room in Canada, they churned out Fences, adding in vocal harmonies and instruments, his favorite part of the process. How long does it take Chris Mansfield to write a song, you ask? Well, while someone was taking a shower at his house, he sat down and wrote it out. Maybe five minutes.

At his core, Chris Mansfield is all about release. “It’s kind of like an emotional vomit. It’s just out! I’m able to avoid weird clichés and sounding insincere, because it’s so natural when I do it. There’s no way I’m not being honest.” And it shows. Mansfield mentions that if he could sound like any band, it would be The Cure. He’s been observing the music scene in the Pacific Northwest: Guys with tons of tattoos (much like himself) who are writing these melancholy stories. This is his aesthetic: something almost sad or utterly embarrassing, but you stop and listen, because it’s catchy. He notes The Cure song, “Boys Don’t Cry” when examining this style. (His fave Cure album is Disintegration)

When asked about what his advice is for kids in music school, yearning to do something with their craft, he laughs a little: “Patience,” he begins. “One moment will lead to another moment. One person might hear your song and give it to another person and give it to another person. It’s sort of out of your control, you know? Definitely have drive and have a vision, but trust that the universe has some sort of plan!” And with everything coming at Mansfield at once, he’s humbled by the idea that any paper would write something about his music, but he also knows it’s finally his time. “If you’re doing something that you really love, and playing music that you really love, if it doesn’t take off to a level that you dreamed it would, at the very least, you’re doing what you like anyway.”