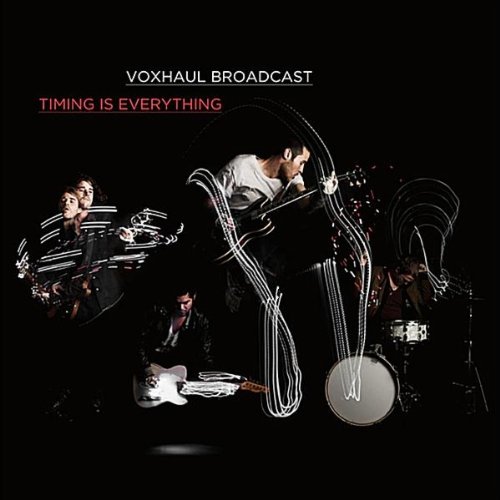 One live shot. That’s how Voxhaul Broadcast recorded and mixed their first EP, Rotten Apples. Fast, off-the-cuff, loose and light; from their 2008 debut EP, to their musical sound, Voxhaul Broadcast seems to have found their style.

Since then, the four-piece from Orange County has moved to L.A., got to have Chris Thorne of Blind Melon fame have a hand in producing their upcoming full-length album, Timing is Everything, and have been playing a slew of music festivals, including SXSW.

They’ve dubbed themselves a psychedelic/rock/soul band; the psychedelic genre seems to be getting a bit threadbare and void of any meaning lately, but the energy of this band seems genuine enough. Tracks like “Leaving on the 5th” start out with starry, galactic guitar before breaking into a jam that at the very least makes you nod your head; it’s poppy and tolerable, and with 19 American shows coming up, before heading over to London, England on May 1st, the buzz behind Voxhaul Broadcast seems to be catching on.

Appearances on “Morning Becomes Eclectic,” the same radio show that artists like Tom Waits have hung around on, etting named as one of L.A.’s “Best New Indie Bands,” by Nic Harcourt of the LA Times Music Issue, getting their track “Rotten Apples,” on the television show Ugly Betty…Looks like this band’s in the midst of their fifteen minutes. Maybe they’ll even get twenty.

Despite a hectic schedule, MVRemix got the chance to catch up with the band:

MVRemix: So why did you decide to become a band? How did it happen and what was going on?

David: We became a band because we liked playing together. A band is all about the musical chemistry that only happens when you have those people writing together. That chemistry comes really easy because we have known each other since we were kids.

MVRemix: What were some of the very first/earliest bands you all remember hearing? Did it shape the way you came into music?

David: Nirvana was a big one and also Weezer’s Blue album. Beck’s Mellow Gold was also played a lot back then. Those bands aren’t our bread and butter like they used to be but I think they shaped the way we feel music forever.

MVRemix: What is it in life that gets you wanting to make music? What are some experiences that get you going? Who are the people and what are the things that make you wanna go rock out?

David: Everything that I have been through is a part of me whether it’s on the surface or subconscious. There have been so many songs that just poured out of me without even trying. What I’m saying is life in general is the most inspiring thing to write about for me.

MVRemix: If you could play any kind of show, with any kind of audience, in any part of the world, how would it be?

David: I have heard the Redding Festival crowd is so fun to play for. I hope that’s in the cards for me in the near future.

MVRemix: What do you want your music to do to people?

David: I hope it does for them what it does for me. When I’m playing our songs I get lost in it and get free from it.

MVRemix: If you were told you that you were going to pull a Pink Floyd and keep being in this band for another 30 odd years, would that make you excited? How do you imagine your style and music might change over the years?

David: I would love to do this for the rest of my life. It’s hard to say how our music would change over the years because only time can tell that kind of question.

MVRemix: Do you see your music as timeless, or do you think it will just be forgotten in a month or so?

David: I think our music is timeless but doesn’t every band think that? To elaborate would only make us sound like were in some scene in Spinal Tap.

MVRemix: What do you think the future holds for music? Where do you see it going?

David: I am exited for the future of music. There is something happening and all you have to do is put your ear to the tracks and listen.