American Legacies is a joint effort released on April 12th, 2011 by the Preservation Hall Jazz Band and the Del McCoury Band. Both groups represent an American born musical genre rich in history.

The Preservation Hall in Louisiana was founded in 1961 to preserve the unique bayou sound of New Orleans jazz. Since 1963, the Jazz Band has toured continuously all over the world to introduce people to their traditional music. The band has not only kept the old alive, but has also reinterpreted the style for contemporary fans. Today, the band is comprised of creative director Ben Jaffe (tuba), Mark Braud (vocals and trumpet), seventy-six year old Charlie Gabriel (clarinet and vocals), Clint Maedgen (saxophone and vocals), Joe Lastie Jr. (drums), Freddie Lonzo (trombone), and Rickie Monie (piano). Most of the current members are from New Orleans and have a family history of playing jazz.

The Del McCoury band was enlisted to provide the bluegrass point of view on this collaboration album. Del was featured as one of the many guest artists on the Jazz Band’s 2010 PRESERVATION album which was made to raise funds for the Preservation Hall and its Music Outreach Program. The results of the first exercise were so good that the Jazz Band asked Del to create music with them again on American Legacies.

Del McCoury’s style of bluegrass began to flourish after joining Bill Monroe and His Blue Grass Boys in 1963. Now he is lead guitarist and vocals of his own band which features his two sons, Ronnie McCoury and Rob McCoury, playing mandolin and banjo respectively. The other two band members are Alan Bartram on bass and Jason Carter with the fiddle. Del has received multiple awards for his music and just last year was awarded the lifetime achievement honor from the National Endowment for the Arts.

The album opens very upbeat. Track two is a cover of Jimmy Wakely’s famous 1948 hit “One Has My Name (The Other Has My Heart),” which is about loving another woman while being stuck with the one to whom you are already married. The jazz trumpet adds a special element to this classic. The fourth track titled “Banjo Frisco” is an original instrumental with a prominent banjo line throughout the piece, punctuated by strong horns.

In the middle of the album there is an interesting cover of the gospel hymn “I’ll Fly Away.” The harmonizing is really great and all the vocalists can be heard showcasing their pipes. The ninth is a rendition of “The Sugar Blues,” written by Clarence Williams in 1920. Introducing and ending the piece is an amazing performance of the wah-wah mute.

Toward the end of the album is track ten, “Mullensburg Joys,” another old favorite, made popular by Jelly Roll Morton, re-done splendidly. The second to last track, “50/50 Chance” is a Del McCoury Band song from their 1999 release The Family Album. This version is much more swingy and fun than the fiddle heavy original.

On the tour in support of American Legacies, both the Preservation Hall Jazz Band and the Del McCoury Band will have short separate sets as well as playing songs from the new album together in a spirited fusion of jazz and bluegrass. 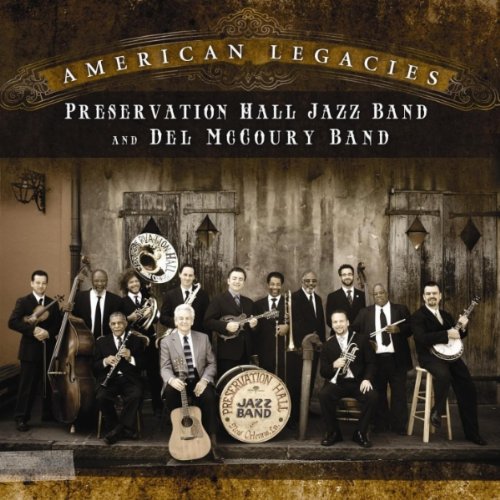