So maybe if you threw Kimya Dawson into a snow globe with Blockhead, Go!Team and Grace Jones, you’d have some garbled version of Tune Yards, or as she writes it, “tUnE YaRdS.”

This bizarre American girl, Merrill Garbus, has tossed together this jankey, self-produced offering that clanks and tweaks along in some live electronica twister. Called whokill, it dropped April 19th, and it’s her second release. The first, Bird Brains, was put out on recycled tapes by Garbus herself.

With the lilting voice of a mannish girl, the first song, “My Country” sounds like a Hawaiian shirt caught in a sparking lawn mower, all harsh vocals, and feels more dancey on subsequent listening. On the first listen, you just want to listen.

Tracks like, “Gangsta,” call to mind 80’s graffiti and the Talking Heads; it sounds like Garbus is singing into a Casio keyboard microphone and rocking a flattop. With percussion that sounds like the smashing of a big tin washtub and lyrics that rap and smack all over the busy melody lines, it can be a little much at almost four minutes long. But keeping it unpredictable with scraps of little kids talking and gasps of breath, glitching vocals tracks and finally this whole back alley implosion, it’s definitely going to keep your ears open.

Garbus chucks a single from this February onto the LP too, called “Bizness.” It starts out with a bed of bird peep vocals, then goes plowing off into a wide ranged void; electric layers of strange 80’s sounds. I’m waiting for a key-tar solo here. “Bizness” is a good jam though, light and solid, jingling little keyboard bits and a fistful of other noises going on.

On the last track, “Killa,” Garbus tells us she’s a new kind of woman. The percussion has this tough hip hop vibe but well mixed with a sunny street party kind of feel, blending in some spoken word stuff, and keeping a fresh beat with these cyclical shimmery instrumental breakdowns, funky bass lines and a soft ending, showcasing the prettiness of Garbus’s pure voice. A pleasant, peaceful way to end a chaotic album.

The whole mess of it comes off as hectic as hell and extremely busy, but if you’re looking for a funky, thought provoking, exploratory trip, you just found it. whokill is nothing to sleep to, basically.

Apparently when playing live, Garbus does all of the percussion loops herself and does the rest with her own voice and ukulele, as well as pulling in an electric bass player named Nate Brenner and there’s talk of putting in a sax section for the whokill tour itself. She’ll be stopping off right here in Montreal on May 13th at Sala Rossa, and if the live show brings even half as much of the gloopy recorded mania, it’ll most likely be an entertaining show. 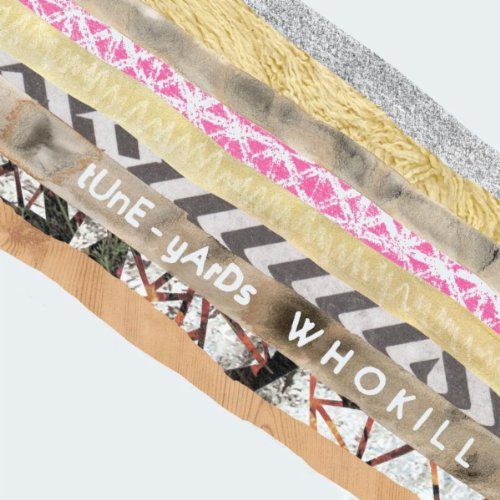