The Donkeys are a San Diego band who own a sound that allows them to shift styles often and incorporate a number of influences throughout Born With Stripes, their third full-length, released on Dead Oceans (home to Dirty Projectors, Akron/Family and Bowerbirds, among others). Born With Stripes features great tunes and enough variety that it’s an intriguing question as to why the band is less known – the answer probably lies between them being regarded as un-cool for sounding like a classic rock band (somehow transplanted to 2011) and the a few seemingly inherent weaknesses.

The record is often surprising – “I Like The Way You Walk” is radio friendly folk-rock with what sounds suspiciously like a Modest Mouse guest-spot in the bridge. Incredibly typical lyrics seem to be the band’s weak-point – the album’s opening lines are “I’m a boy/you’re a girl/you’re a universe/in my world” and on “Bloodhound”, there is talk of a girl leaving, a Greyhound bus – said bus breaking down – and a dog. The chorus is “Baby, it’s true/I’m in love with you”. The album is not necessarily bad as a result – it’s entirely possible The Donkeys’ approach is “warts and all” – why mess with what comes to mind lyrically? The instrumentation feels calculated but free-flowing – the songs are like refreshments and the lyrics seem to be of an inferior effort. Born With Stripes is the bastard love child of great composition and weak writing.

Various effects undoubtedly added in post-production are used sparingly and never appreciated. “Kaleidoscope” seems to float off into nowhere before being brutally cut off by a sound akin to scratching a record while it’s playing. Harsh as it sounds, this is a band that doesn’t seem to comprehend the steps towards creating a marketable and critically friendly folk-rock record in this decade. The Donkeys are a host to a vast degree of talent that gets overshadowed too often by weak lyricism and, to a lesser degree, asinine production touches. Born With Stripes is better for background listening if you consider yourself a cynical person or critic, whereas the elements that bother people like myself may be less bothersome and allow for a more careful listen to others. 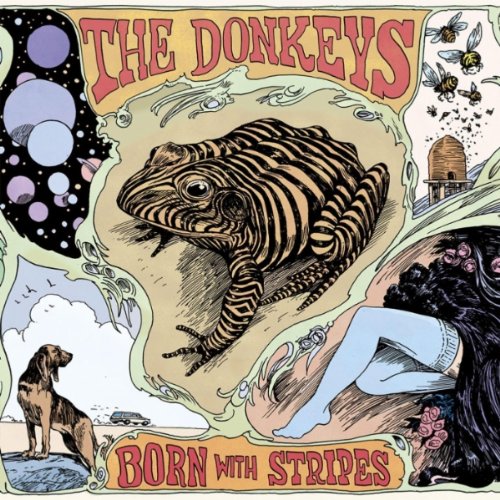