Through fantastical near silences and obvious growth, we can all go back into Fleet Foxes forest, as Helplessness Blues, their 2nd LP dropped May 3rd.

Helplessness Blues seems like a raw exhalation of breath and while Fleet Foxes last album, released almost three years ago, was like trekking mountains in Oregon in the fall, The album is some sort of strange twilight and there’s a calm resolve in Robin Pecknold’s voice as his melodies chime aching and trill over renaissance guitar and this full castle sound of instrument heaps.

In a 2009 interview with The Guardian, Robin Pecknold mentioned Van Morrison’s Astral Weeks as a context point, saying that it was “the best-sounding album because it sounds like there were only six hours in the universe for that album to be recorded in. So I want [Helplessness Blues] to have that feeling.”

A reviewer could take this section here to mention the money involved or the time spent recording, the wait for the album, speculate about the relationship that almost went to shit over Robin Pecknold’s musical dedication…but the music stands so strongly for itself, that it doesn’t really matter what went on behind it.

Singing about walking blindly through the sun and temporary city stays, holding someone at arm’s length and then plunging off into their signature bedrock sound of cloud-shape vocals, The plains/Bitter Dancer is just one track of many entrancing tunes on this valuable album.

Shockingly wistful and amazingly theirs, ethereal and involving, Sim Sala Bim has a Simon-and-Garfunkle-at-the-train-station-vibe, if the train-station was in an apocalypse city that nature had claimed, covered in redwoods and ivy.

Like strangled geese, horn squawks worry themselves over rubber band twangs and melting, dragging string sections on The Shrine-An Argument and Lorelai brings back the warmth of Fleet Foxes previous stuff, despite Pecknold singing about feeling like trash on the sidewalk; there’s a bit of a waltz groove going on, flutes and old stories.

The album wraps with Grown Ocean and the lyrics weave together portraits of old children growing thoughtfully by the sea; loose lyrical coverings for a million personal experiences Pecknold was drawing from that none of us will probably ever know.

Rare are the albums that are actually an experience to listen to; this isn’t some harassed offering up of a product borne from the pressure of record labels or some desperate grab to maintain a dwindling and bullshit rock star lifestyle.

Fleet Foxes take you into their melodies, bring you inside their trip and what’s there is what was there on their last album; timeless, pure expressions and essentially just good music. 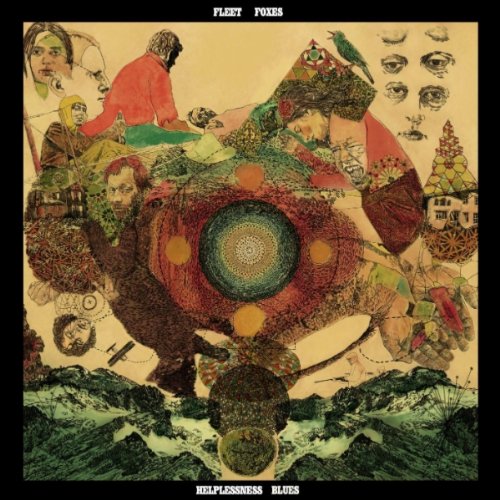