Recorded mostly in an abandoned bank in Kansas City, Strange Hearts’ sophomore album is full of the echo and reverb one would expect coming from a room of concrete and steel.  The sterility ends there, however.  The album is a romantic tour of the United States, ensconced in a variety of effects and instrumentation, including great swaths of whistling, tight rhythm guitar, and even the singing saw as played by Secret Cities touring guitarist Ryan Donegan.

The instruments are pushed forward on most of the tracks, and this combined with heavy vocal reverb lends a lot of ambient strength to Strange Hearts, especially on the more frenetic tracks such as “Forest of Love,” but it also causes the words to often be obscured.  Marie Parker, the female vocalist and original member of Secret Cities when they were called White Foliage, tends to sing on songs with more minimal arrangements.  Her vocals possess an uplifting lightheartedness, and make tracks such as “The Park” and “Pebbles” stand out as some of my favorites.  “The drag race is over…you smashed up your car,” she muses on “Pebbles.”  This song is one of the few that gives the listener enough sonic space to let the lyrics really seep in.

Unlike their first album, Pink Graffiti, the songs on Strange Hearts don’t draw as much from the Beach Boys, although the harmonics can still be heard, especially on “Love Crime” and “Forest of Love.”  Love seems to be the major theme of the record, as it is by default in the majority of popular music.  What really stand out on this record are the courageous and inventive variations in rhythm, rapid transitions, and industrial noise that elude to a post ‘60s apocalyptic Mid-western ethos.

Listening to Strange Hearts, I could feel the television squawking in the background with reruns of bad sitcoms, and the static of the AM radio broadcasting songs about malt shops and drag races as the rust belt continues to rust and fall in upon itself.  Where do you go when this happens?  An abandoned bank vault seems like a pretty good bet. 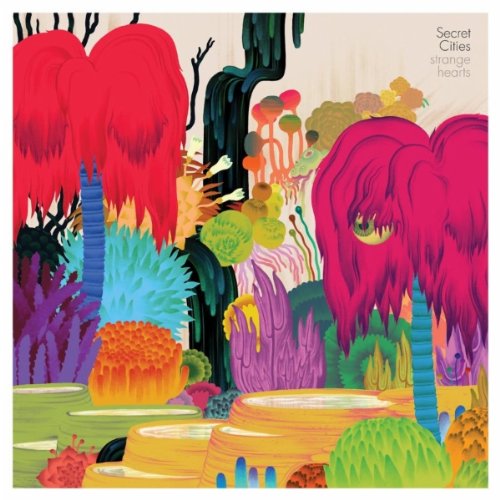