What would you do with your time if you were stuck inside on a stormy day? Twiddle your thumbs? Watch a movie? Write songs for an astounding album?

That is exactly what inspired Phil Cook’s solo self-titled debut and now his Hungry Mother Blues release – a North Carolina ice storm. However, this time around his sophomore release will not be given away for free.

The talent of multi-instrumentalist, Phil Cook, is the ability to immerse in the revered investment of the folk music heritage thanks to his part in Megafaun. It is no surprise this molded Phil Cook’s entrenched straightforwardness of his solo debut – with banjo, dobro and guitar in hand.

The passion, intensity and attachment are intricately embedded in the lyric-less and sole instrument tracks characteristic of Phil Cook. Hungry Mother Blues is raw talent at it’s finest – no strings attached. That is to say it is not without its deficiencies.

Phil Cook is simply an American folk revivalist. Cook’s passionate masterpiece Hungry Mother Blues record aims to stand up for the existence and the longevity of genuine folk music. Phil Cook and His Feat – are a solitary unit – unless you count the dull and heavy stomp of his foot as another member. But don’t confuse solitary with loneliness; jamming with the plethora of stylings of blues and country, crediting the expressivity greats – notably the fingerstyle guitarist John Fahey and slide guitarist Ry Cooder.

Hungry Mother Blues makes it clear that it stands in contrast to a Megafaun album – greeting listeners to the warm zephyr of “Frazee, Minnesota,” establishing Cook’s intelligible songwriting craft early on. “Juniper” eloquently provides the listeners with an exceptional sing-along track – ahem – keep in mind this is an instrumental record. Rustic themes are resuscitated with convoluted adroitness and transforming interchanges. Phil Cook and His Feat counterbalance this with groovy and gentle driven tracks such as Cooder influenced “Ballad of a Hungry” and the gallop of the banjo melody “Waiting ‘Round the Oven Buns.”

Don’t think that the shortness of the record confines the diversity of Cook – within these eight songs, the intricateness blossoms, breezing through daydreamer blues of the likes of “Sparrowander” and the pungently bold “The Last Steam Engine Train.”

Hungry Mother Blues’ raw and splendidly authentic folk are embellished and hide behind the intentional imperfections of folk tradition – the natural reverb, the background static and the buzzing of the fret. The eight causal song / twenty minute sly genuine schemes that Phil Cook and his Feat unleashes in his American folk songs are nothing short of perfection. 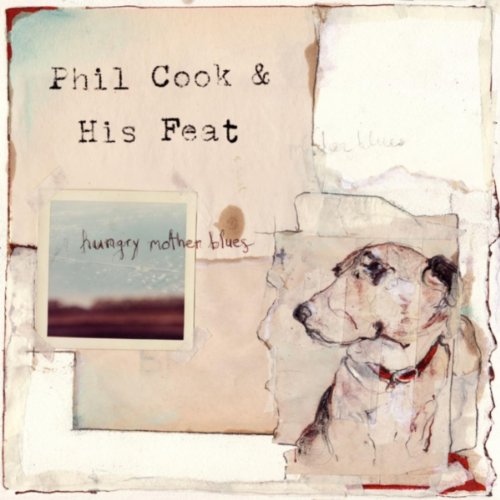