With their sixth album, The Future Will Destroy You, Viva Voce has created a haunting, mellow record that is sure to please their fans.  From the lush, Smashing Pumpkin-esque rhythm guitar on “Analog Woodland Song,” to the jangly strings and gentle “clack” of the rim shots on the road song “Cool Morning Sun,” the album is consistently well put together.  The years of experience primary band members Anita and Kevin Robinson have with both their gear and each other has obviously paid off.

Founded in 1998 in Muscle Shoals, Alabama, Viva Voce have been residents of Portland, Oregon since 2003.  The music reflects a melodic indie aesthetic that includes shades of Mazzy Star and The Breeders, a psychedelic pop that is often abstract lyrically but never strays very far from the melodies.  The ten song album doesn’t possess the most uplifting outlook on the world, especially on the tracks “No Ship Coming In” and title track “The Future Will Destroy You.”

“We conceived this record – it’s title, songs, cover art, etc.. – back in December of last year. Tsunamis, Libyan wars, devastating weather and all the otherwise awful things had yet to happen.  I keep up as best I can with world events, and it strikes me that our new record is proving bizarrely prophetic,” Kevin Robinson writes on the bands website.

Not the most recognizable band name in the American indie lexicon, they still have had commercial successes, and a following probably created more by word of mouth than marketing dollars.  Viva Voce means “word of mouth” in Latin, and the band is carrying on diligently to spread their sound.  They’re songs have appeared on TV shows “One Tree Hill” and “Friday Night Lights,” and they have toured with such popular names as The Shins and Jimmy Eat World.

Highpoints on the album include “We Don’t Care,” which has a mesmerizing dual guitar segue.  Kevin Robinson’s harmonizing is very subtle and works well with the smoky strength of his wife’s lead vocals.

Viva Voce is scheduled to go on an American tour at the end of July, and The Future Will Destroy You has been released on both CD and vinyl by Vanguard Records. 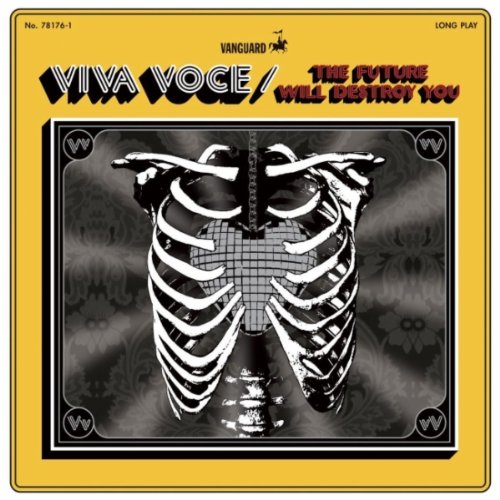