DJ Ernest Gonzalez released his debut album as Mexicans with Guns called Ceremony earlier this year in May on the label Innovative Leisure. The San Antonio native has been fairly prolific as a remix artist and producer. With his MwG project, Gonzalez creates a provocative mixture of club music, hip-hop, electronic, and traditional Latin sounds. On stage his persona resembles a stereotypical Mexican wrestler complete with Luchador mask. Gonzalez insists he is an introverted person at heart and uses symbols to make people think. Considering the recent drug cartel wars in Mexico, his recording name has made some interesting impressions.

Ceremony was conceived as sort of a spiritual journey to be listened to continuously from beginning to end. Gonzalez is influenced by ancient rituals performed by indigenous people. The record features several artists who add direction to the tracks that they guest in. Without knowing the concept behind the album, some of the musical choices present would make little sense.

The first track sets the mood as the “Opening Incantation.” Pulsating drum beats are heard from off in the distance. Once they reach a louder volume, a little shamanic melody is thrown in as well as seemingly random Spanish lyrics. Third on the album is “Restart,” a slow and murky song with smooth alto vocals sung by Sasha Perera.

“Fields” is by far the most pop infused track. An undulating electro tune conveys an 8 bit attitude. Number six is “Highway to Hell” which from the start is a total banger. Dark sounds surround Freddie Gibbs’ angsty gangsta rhymes. Track eight titled “Me Gusto” gives a cumbia dance beat the electronic treatment. Excellent old school vocals are provided by Chico Mann from Antibalas.

Toward the end of the album is the eleventh song “Got Me Fucked Up.” West Coast battle rapper Nocando brings a hilarious fury on this track with lyrics like “they got me fucked up like a Tijuana boob job.” The background music is grimey and is a great accompaniment. “El Moreno” sends the listener out with a cosmic space anthem shaped by Helado Negro.

Mexicans with Guns’ have been touring the U.S. since June and will continue to do so until the end of July. Ceremony makes for an entertaining summer soundtrack. 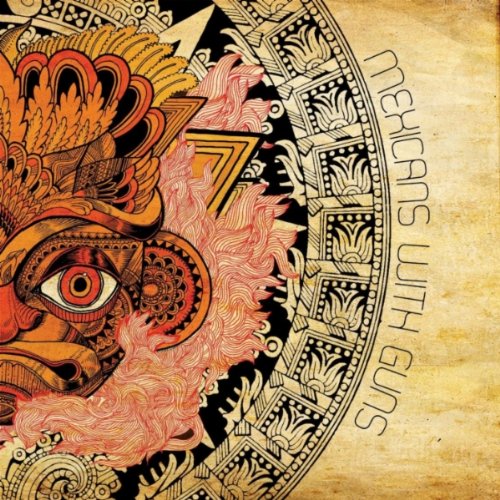