There are very few things that I look forward to all year. One of them is Christmas, because it’s the only day I get to play Rock Band as a full band of family members. The other thing I look forward to is the Osheaga Music and Arts Festival that has been going on for six years here in Montreal. The festival is easily the highlight of my summer, and many other Montrealers, as well as out-of-towners. With Eminem headlining one of the three days this year (which I wrote a longer review on over here), it was sure to be a great one – and Osheaga did not disappoint. 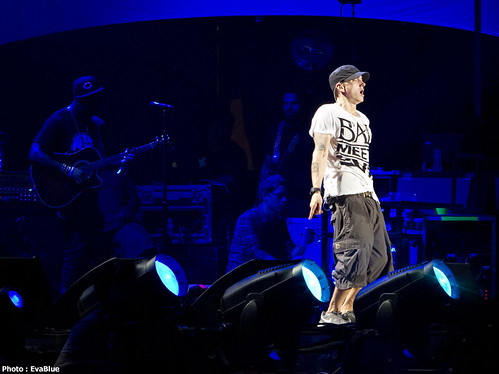 I heard that the lineup to get into the festival site had started early in the morning, which isn’t typical for the fest. Osheaga is big, but not as big as Bonnaroo or Lollapalooza – so there’s no camping on site, and there aren’t multiple barriers separating the crowds. I got there at around 10AM and doors opened at 3PM. There were apparently different lines going on at the time, which made for huge problems because some people who had been waiting since 10AM, and people who had just showed up at 3PM got in at the exact same time. Disheartening, but no problem as my friends and I pushed through the crowd to about 15 rows back and waited. ALL. DAY. 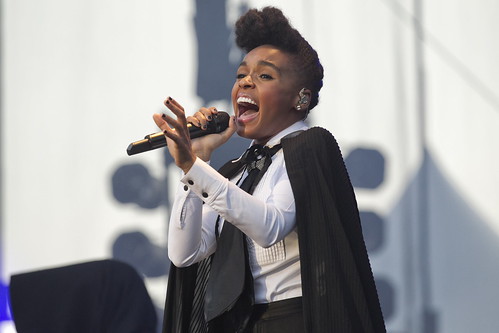 The highlights on the main stages that day were under-appreciated due to the massive amounts of people only there for Eminem. The Knux, a hip-hop rock duo from New Orleans put on a great set that no one cared about. While Broken Social Scene is not my cup of tea, people who knew them ate it up as they played hits like “KC Accidental” and even covered Modest Mouse’s “The World at Large.” Montreal’s very own Bran Van 3000 put on a show that genuinely surprised me, even if the vast majority of the crowd (including myself) barely knew a song by them. And Janelle Monáe – wow – stellar show that Shady fans ruined with their chants of “Sha-dy! Sha-dy! Sha-dy!” between songs.

The day was, of course, all about Marshall Mathers. I’ve written a long enough review to satisfy your needs, but in short – lived up to all the hype. In my opinion it was not the best set of the festival. Don’t get me wrong, it was amazing to see Eminem on stage spitting rhymes, but I’ve seen better headliners. He is more suited for stadium shows where he can have a headlining set of two and a half hours instead of 90 minutes. But never have I seen a crowd of 38 000 people so into a show. That’s what really amazed me. 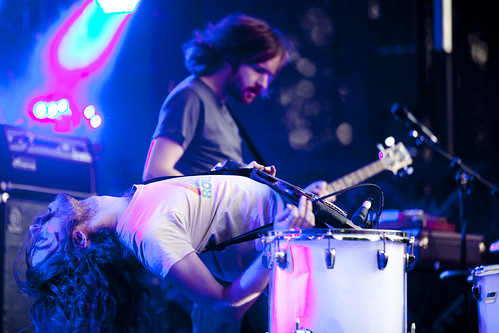 Considerably less busy, but considerably more scorching, day two of the fest was an amazing event in itself. The Midway State opened up playing a few tracks from their brand new Paris or India, but the lead singer’s vocal chords seemed to underwhelm just a bit. Manchester Orchestra proved to be a worthy contender for one of the best sets of the day despite their short length (“Shake it Out” was definitely a highlight), and Tokyo Police Club truly made a fan out of me, shelling out “Your English is Good” and “Wait Up.” 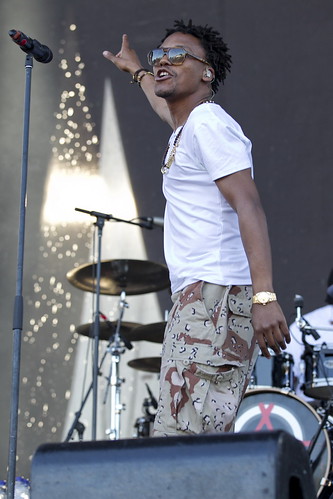 Sam Roberts Band was late to the stage with technical difficulties, but the Montreal native made up for it, delivering a wonderful short show with the crowd chanting along to “Where Have All The Good People Gone?” Lupe Fiasco, while his name should be mentioned on the urban side of this site only, actually gave rap-rock set with a full band that sounded spectacular. “Shining Down” and “Kick, Push” were some choice tracks, though the anti-American rant in the middle of his set was just random. He went on for a good five minutes saying things like, “If you want to vote for the most meaningless candidates, then come on down to the United States of America!” This piece of activism should’ve been left at home, but his set still set us all on fire. 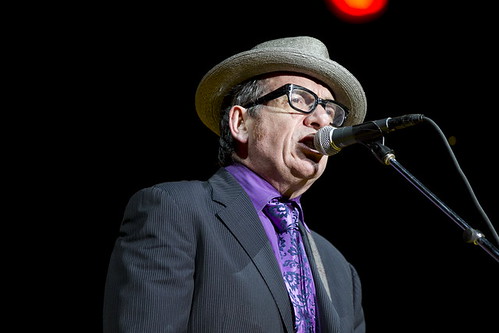 The headliner of the night, Elvis Costello & the Imposters, weren’t exactly headlining material according to festival-goers. A very meagre crowd of 2000 people showed up at the main stage for him. Sad, but the openers for him were Death From Above 1979, and the punk show crowd probably didn’t want to stick around and watch old time rock n’ roll. Bright Eyes was also right before the headliner. I can’t say whether Costello put on a good set or not, as I wasn’t there. To me, the real headliner was somewhere else. 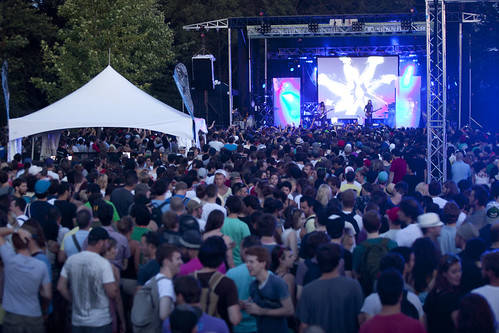 Over on the small “Green Stage” was Brooklyn duo Ratatat. An all instrumental set as usual, the band showcased songs from all four of their albums. Opening up with “Loud Pipes” got a great response as the intoxicated crowd bounced to the beat. A huge dancing pit ensued as “Wildcat” came out in full force, and didn’t stop till the set-closer and fan favorite, “Seventeen Years” brought my day to a close. Ratatat was the highlight of the festival for me, but the fun didn’t stop there. 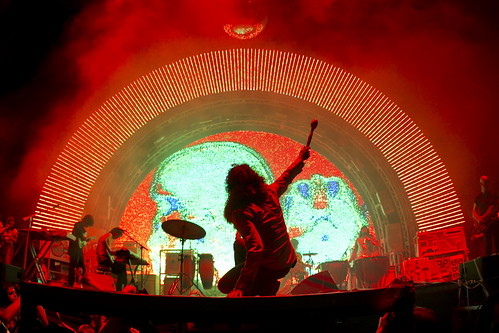 After two long days, I showed up to the festival a little later than usual. The Pains of Being Pure at Heart was first up on my list, as they gave the “Green Stage” crowd a nice pop rock set full of great tunes. Meanwhile, Cypress Hill went on stage at 4:20PM to a huge cloud of smoke, as people toked up and they rapped “Dr. Greenthumb” and “Insane in the Brain.” It isn’t a surprise to me to see weed-rap acts have huge crowds at Osheaga anymore – which is primarily an alt/indie rock fest. Snoop Dogg had a pretty sizeable crowd last year, and Cypress Hill was no different. 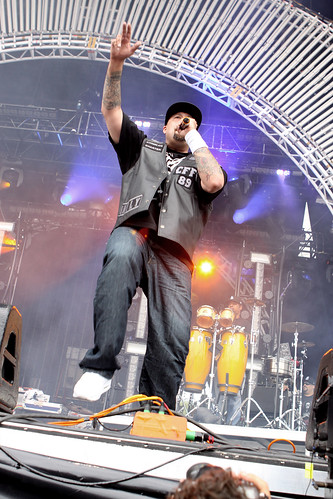 Indie pop sensation Ellie Goulding made a splash, belting out her synthy tunes in a splendid fashions. She was really into her set, as her energy was purely electric. So much fun to be had at her show, even if it had been cut ten minutes short due to time constraints. The Joy Formidable also had the plug pulled on them, but didn’t mind that much at all as they rocked out on a tiny stage situated in the forest. They deserved a much longer set and were probably the breakout stars of the festival. 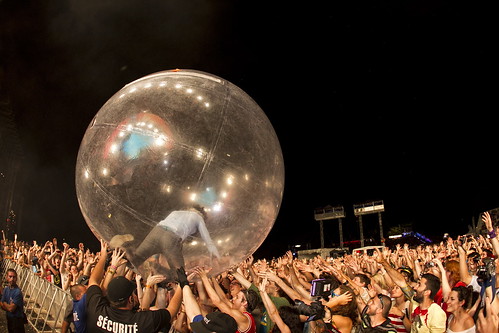 City and Colour, The Tragically Hip, and Death Cab For Cutie – one right after the other. All stellar sounding, and while I’m not a huge fan of the former artists, Death Cab has always had a place in my music library. Opening with “I Will Possess Your Heart,” they already had the crowd under their indie rock spell. Though there were even more technical problems in store for the band, they pulled through and gave a wonderful set leading into The Flaming Lips. Wayne Coyne is quite the “guru of love” as one radio personality put it. He rolled atop the crowd in a bubble, and the band played the entire “The Soft Bulletin” album. While I was at MSTRKRFT for the majority of their set, The Lips’ last few songs were beautiful. It was trippy, and not everyone’s cup of tea, but as they closed out with “Do You Realize??,” you could feel the magic of the entire festival coming to a climax.

And now, we have to wait a whole year to experience that magic once again. On the upside, at least we’ve got Christmas in a couple months…