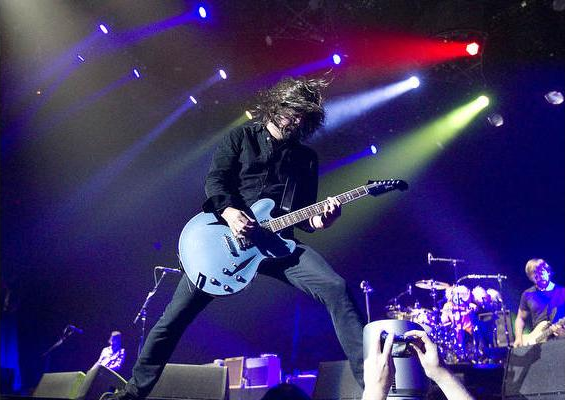 Despite pop, hip-hop and rap taking over album sales for the past few years, rock is not dead – and Foo Fighters proved just that last night in Montreal. Playing to an estimated 11 000 fans, the alt rock group formed from the dissolution of Nirvana absolutely rocked the Bell Centre with a 2.5 hour marathon of a setlist. It was one song after the other and no end in sight, and hardly ever a break in between two tracks.  There was no letting up from Dave Grohl and company from beginning to end.

With the opening scream of “Bridge Burning,” the fire was ignited. Grohl was like a 10 year-old on speed, running around on stage from side-to-side, headbanging like a madman – which would be headache-inducing for any normal. Yet, Dave was like a god to those watching, as he burst into “My Hero,” giving way to what was probably the biggest sing-along of the night. He had the audience hanging on every word, and soon enough moshing with every guitar strum. When “White Limo” and “Arlandria” erupted one after the other, I basically went from tenth row to right against the barriers – which was more than satisfactory. And by this point, about seven songs into the set, there had not been a break.

Grohl finally rested for a minute while Hawkins on the drums gave the crowd some vital information:

“Our tour manager just informed us how much Montreal embraces rock’n’roll,” he said through the golden locks of hair covering his face, “because there are 3000 more people here tonight than there will be for Britney Spears tomorrow.” And so, the crowd cheerer and jeered in the arena’s usual loud fashion. If there’s really any truth to this, I’ll have to check and post it tomorrow. But hey, Grohl was happy with it: “We finally beat fuckin’ Britney Spears!”

The band played a lot of old favorites like “Learn to Fly,” “Breakout,” and Hawkins even pitched in on vocals with “Cold Day in the Sun.” All the while, crowd surfers were rampant, Grohl kept on running all over and having a guitar duel with lead guitarist Chris Shiflett. Dave obviously won, because he had the power of a rising platform in the middle of the arena. Let’s face it, as great as Pat Smear and Taylor Hawkins are as band members – the fact remains that Grohl is the true rockstar of the group. Being apart of Nirvana kinda does that, y’know?

“This is the part where I have to scream a fuckin’ loud as I can, right?” Grohl groaned as he neared the end of Monkey Wrench, “But I see all of you guys out there, and at that point – it’s easy. However, I like to do this part in the dark.” The lights shut off, and Dave goes off: “One last thing before I quit / I never wanted any more than I could fit into my head / I still remember every single word you said…” His voice is definitely suffering from the years of going all-out night after night, but he’s still got it.

Final highlights of the night: Had to be “All My Life,” with the crowd jumping and pushing and just going all out. The energy was everywhere, and the band was definitely not taken for granted. Grohl came out on the elevated platform for the encore, performing “Wheels,” “Best Of You,” and half of “Times Like These” acoustically. Fans knew every single word as per usual, and we couldn’t get enough. If Grohl’s voice could handle it, we’d all stay there for hours on end. “Everlong” brought the show to a perfect close.

So, no – rock has never been dead. And I have faith that if it ever does die, all we need to do is place a call to Foo Fighters for a resurrection. Few theatrics, amazing guitar riffs, and a lead singer whose energy at 42 years-old defies logic – a perfect recipe for one of the best night of your life, and mine.