Culprate, a one man-band electronic/experimental band signed to Dubsaw records, just released his maniacal album, Flatline. I actually have no idea who Culprate is, name-wise, he’s a mystery from Watford, England. The only real thing that is not a mystery to me is the man’s music. Void of vocals besides the very rare sprinkle of sample voices like on “Curious George,” which for brief moments seems like Culprate’s insane version of Madison Avenue’s “Don’t Call Me Baby”

Spawned in 2008 from the electronic depths of England, the “experimental” label fits Culprate quite well. I feel as if this album has been handed to me by a shady man outside a rave. It has a very very homemade feel to it, I’m not saying I could make this music, but I feel like this is the sound of Dead Mau5’s garbage being tossed out. Flatline starts out a little better than it ends, “Red Number 208.85” is drug/clubtastic and “Goat Vs. Bear”  and “Grime Frog” remind me of a quality early-90’s video game soundtrack.

After the midpoint, the highlights begin to fade, and the tracks all mesh together like some sort of bored child’s blender concoction. The song titles could also fit that description, “One Man One Jah” has no seeming musical correlation with its name, to the lord Jehovah or the Rastafari movement. BUT it’s instrumental, how am I supposed to know what a dubstep ode to Jah would even sound like? Maybe this is it. That’s the problem with Culprate, I don’t even know where to begin, or where to end, and neither does Flatline.

This is what I like to call a dubstep rant. It feels unfinished, rushed and too wild for its author’s own good. Listening to it on repeat is giving me a headache and I can’t even find enough Advil to cure it. I think this mystery man can do better. 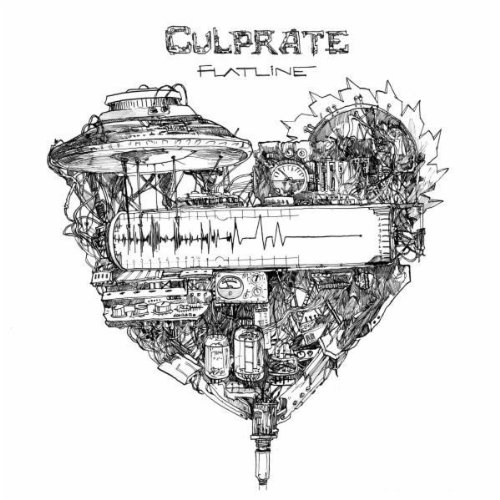