I believe the disconnect between the individual and the family isn’t just an American phenomenon, and perhaps mistakenly found some evidence of that in the new album Moonfire by Australian quintet Boy and Bear.  The nomadic lifestyle the millennial generation has been forced into will probably be OK for a few years, say their twenties and early thirties, but eventually all that rooting around for the next buck is going to take a toll.   The best song I could find on the record, closing track “Big Man,” made me think about this, especially the lyrics, “somebody told me that your nephew was born…in a wonderful way it was making me feel so small.”  “Big Man,” is basically a love song about the importance of family, and for all I know it’s genesis came from one of the band member’s wife and kids.  Still, I imagine if you’re on tour for a few months, and on your travels you meet a kid whose ego is bigger than yours, it could put things in perspective, make you think about the future, and whether you have one.   Moonfire’s Paul Simon influenced song “The Village” may have similar underpinnings.

Originating from Sydney, Australia in 2009, Boy and Bear has had a skyward trajectory, with Australia-wide airplay on NovaFM and Triple J.  In 2010 they toured the UK with Laura Marling, and released their debut EP “With Emperor Antarctica.” Their song “Mexican Mavis” was even featured on an episode of “90210.”

Moonfire has some good points, including a well constructed sound manufactured by producer Joe Chicarelli (The White Stripes, The Strokes).  They use the banjo to good effect, and some mandolin. Comparisons have been drawn between them and The Killers and Mavis Mumford.

Thematically, Moonfire is rather disjointed, but the lyrics are often inspired.  They also use some inventive orchestration, which will hopefully increase as they mature.  The delicate Asian ambience on “House and Farm” and the stretched thinness of the vocals on “Percy Warner Park” are high points.

All five members are singer/songwriters, and if they can break loose of the pressure to fit into the indie-folk mold, there’s no telling how far they can go. 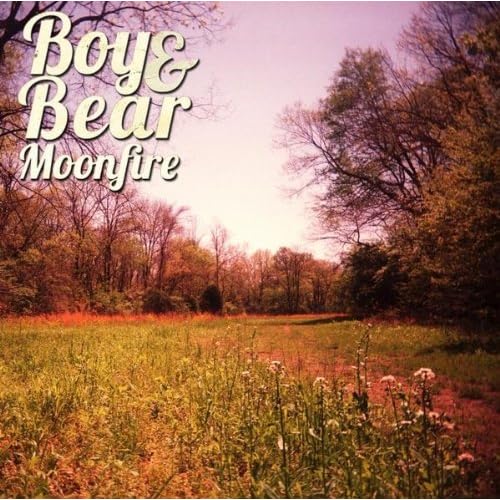