Amen Dunes’s “Through Donkey Jaw,” with its insistent beats and rough-edged rhythms, echoes the raw confessional choruses of the Velvet Underground. It’s washed out reverb recalls old psych rock, and the lyrics, sung like mantras, sound as much like chants as choruses.

Take the instrumentals from the Velvet Underground’s Venus in Furs, and vocals from the White Album, and you would have a track that could have been lifted from “Through Donkey Jaw.” The effect is hypnotic. Listening to this album on repeat could put someone into a meditational trance along with the chorus. Damon McMahon’s lyrics differ from those of older artists in that he tends to stick to a phrase or two, and chant them along with the hypnotic drum beats.

Some tracks have a sort of background description leading up to the chanted chorus. He follows up “Not the idea of hurting me/ It’s very me if packing me/ Now my eyes around desires …hopefully , hopefully,” with “more for love, love/ more for eye, eye.” The repeated choruses are definitely eerie, and with lead-ins like that, they’re meant that way. At least, Damon McMahon is sucking the listener into something. Whether it’s part of the new psychedelic folk rock, or simply a take off the dissociative qualities of drug-influenced 60s and 70s music, it does speak of some other world.

“Through Donkey Jaw” is a dissociative album. The trance-like mantras, the crazed rhythms blended softly with washed out reverb, paranoiac voices echoing in the background like white noise- Amen Dunes is psychedelic. Chanting through disembodied voices, “All these visions/ I can see quite clear… I’ll destroy your name,” could have been a tribute to Roky Erickson’s schizophrenic confessionals. “Through Donkey Jaw” is vocalized from somewhere deep within. And like all art that pulls from somewhere profound and hidden, it comes across as a bit strange, maybe even creepy.

Amen Dunes pulled out another catchy album, however strung-out. “Through Donkey Jaw” is enlightened as well as distortional. It makes sense and no sense at all. The best thing to do is to forget about all that and let the music transport you to places inside Damon McMahon’s head. 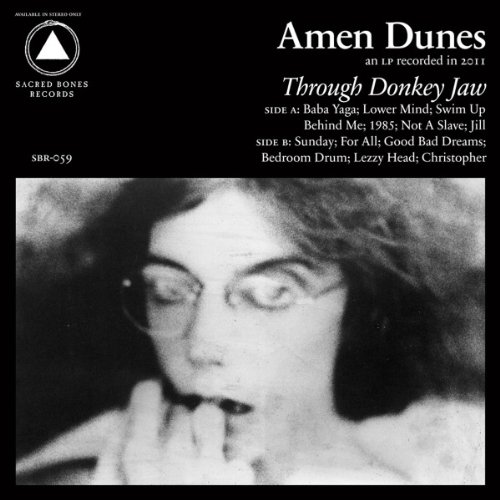