Hard Fi’s “Killer Sounds” is the offspring of 80s pop and NSync. Whether the 90s boy band influence was intentional or not, there is a striking resemblance between “your name keeps running around my brain” and “you’ve been runnin’ through my mind,” an Aaron Carter lyric. The uncanny resemblance to 90s pop is the most obvious influence, although it sounds like Hard Fi might have been going for a more Talking Heads type album, or trying to resemble The Killers. Boy pop had to start somewhere, and Talking Heads pioneered a special kind of wacky rock band pop that influenced 90s and early thousands boy bands of all kinds, from the Killers to Wolf Parade. The difference between the Talking Heads and Hard Fi, is that the Talking Heads have refreshingly bizarre lyrics and original songs.

Hard Fi, though they don’t take themselves too seriously, is pretty canned. If you listen to the lyrics, they’re, like, Backstreet Boys canned:  “gotta cover up my desire/ cuz my hearts on fire/it feels good/ your name keeps runnin around my brain/ your cocaine.” Maybe the Backstreet Boys wouldn’t have mentioned cocaine in their songs, because that would have upset the mothers of their listening demographic. Hard Fi should maybe take a tab out of that book, because their music isn’t quite catchy or up-to-date enough to make a pop station. That’s why “Killer Sounds” is a little confusing. The 90s are passed and there isn’t a huge market for Dad-pop yet. Dad-rock, but not Dad-pop. If a label had to be given to “Killer Sounds,” that would be it.

Hard Fi does throw in some interesting, newish-sounding instrumentals. There are a few beats behind the exaggerated guitar that sound like they could have been off a Sean Paul club hit, which somehow meshes with the 90s boy-band pop sound. It only gets confusing when they mix these elements with Killers-type vocals.  Exactly what Hard Fi was trying to do, who knows. But it did turn out pretty hilarious. 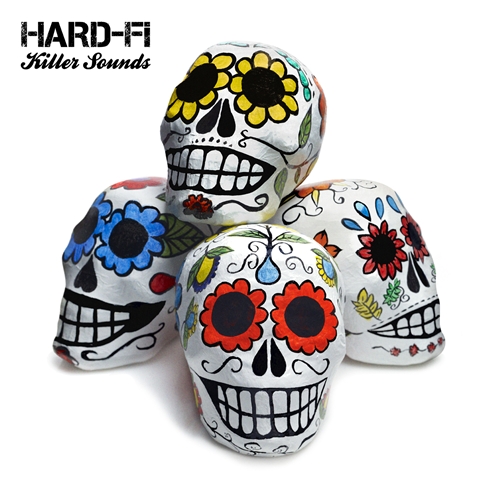