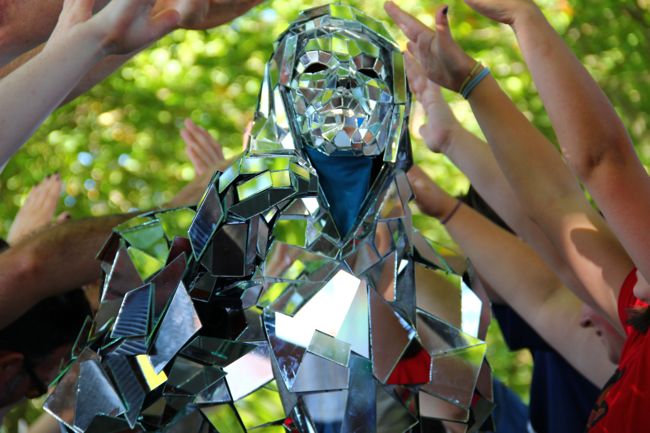 There may not be a better way to begin a day of musical carousing than by watching Charles Bradley, otherwise known as “The Screaming Eagle of Soul,” and “The Black Swan,” take the stage for an intimate, live KEXP performance. The Gainesville, Florida born funk-star and soul-singer is a true legend, and it’s easy to see why. Draped in a royal-red, sequined blazer, and offering a reverential bow, Bradley held the audience in a state of excited bliss through his entire set, which–thanks to the wise and wonderful disc jockey’s at KEXP–went on at least three songs longer than even Bradley had anticipated.

My assessment of the Danish duo Quadron might have been unfairly influenced by Charles Bradley’s thrill ride performance (hard for even the most charismatic of young performers to beat), but charisma seemed to be exactly the thing Quadron lacked. Insisting on singing loopy, lethargic ballads to a well-caffeinated early-afternoon audience is never the best idea (and maybe the Bumbershoot coordinators should be held responsible because as far as I could tell, Quadron doesn’t typically deal in up-beats). Head Like A Kite, on the other hand, knows exactly how to put on a day time show. Clad in white jump-suits, bearing props (including a bald mannequin head and a telephone receiver that doubled as a microphone) and surprising the crowd with a dancer in a panda bear costume, HLAK ensured there would be icing on the cake of their performance. Already one of Seattle’s sweethearts HLAK’s set further solidified their position amongst the ranks of locally adored musicians.

I was reticent to go indoors on such a beautiful, sunny day (why, Bumbershoot organizers, didn’t you let Big Boi perform after the sun set?) but I had to see everyone’s favorite Outkast perform. Letting Big Boi convince me (repeatedly) to put my hands in the air was the right decision. I was hesitant, especially after the first three songs ended up being Big Boi focused medleys of all the best known Outkast songs, but eventually the set evened out providing a worthwhile reason to let Key Arena temporarily shield me from the sun. Around 4pm I reemerged to watch Dennis Coffey’s finger tips fly. His backup band, while endearingly Amish-seeming in attire and comportment, couldn’t hold a candle to the flame of this Michigan-native’s extreme musical skill–I almost wished he’d taken the stage alone, and I noticed (once I’d left the crowd to stand in the embarrassingly long line of people waiting for a Bumbershoot tote bag) that the music was much more adept at being ambient and backgrounded than it was at being a crowd’s focal point.

A shout goes out to those hard working individuals who manned the tote bag tent for the duration of the festival. Bumbershoot schwag was abundant, but the best of it, by far, was the personally screen-printed tote bags that were free, and available to every festival participant. I waited. The bags are large, durable, and feature one of two originally designed Bumbershoot prints (sponsored by Toyota). It was hot, and the line was long, but now I have a Bumbershoot bag and no regrets. Tote bag in hand, I skimmed over the shows of Sharon Van Etten and Urge Overkill (who I guess I should have loved, but honestly didn’t), and zeroed in on Phantogram’s evening performance. I don’t know what to say about Phantogram other than, wow. And yes. If you haven’t let Phantogram into your life yet, now is the time. Sarah Barthel dominated the stage from the beginning, carefully but casually mixing her own vocals to create a siren song that resonated throughout the entire set. At the end of the day, Daryl Hall and John Oates were undeniably the act to see, and I have no shame in admitting that I opted for the less obvious, but immensely gratifying and intense songs of The Reverend Horton Heat. Going in blind, I would never have expected such an energetic climax to my time at Bumbershoot, and I doubt that even the people in Key Arena, singing along to “Maneater” felt as satisfied with the show as Horton Heat’s audience felt. Like the coked-up love child of a blue grass band and a motorcycle gang, Horton Heat’s performance was both charming and terrifying.
Once I’d fully digested my regret at not having eaten a stick of chocolate covered strawberries, not having delineated more clearly on my map where exactly I was parked, and not having heard two feather-haired pop-wonders sing about how their private eyes are watching me, I (like most Seattlites) abandoned Seattle Center until next year, and despite this year’s perfect weather, I won’t be fooled–I’ll be showing up with my umbrella.