Acoustic guitars, piano, a steady tempo, and vocals reminiscent of Sheryl Crow and Jewel, these combined come close to Juliana Hatfield’s sound on the newly released LP There’s Always Another Girl.  The album is a rather large collection of loose tracks, fourteen in total. Loose in that no single song seems to hit that “larger than life” status, and the arresting feeling of ‘failure’, seeps through the country-esque sound.

In many ways this album is Hatfield’s true reflection in the business, and in other words, fans got what Hatfield put into the production. The construction for every step was funded through PledgeMusic.com. With such positive chilled-back backers, I’m a little surprised at the album’s final ‘gloomy’ and ‘country-emo’ sound. BUT hope lies in tracks like “Change the world’ and “Someone else’s problem” that straddle the divide between fun and collected.

Maybe I’ve missed the whole ambiance of what Juliana Hatfield and There is Always Another Girl is about. Unfortunately for me, I still cannot get “the batteries are dead…completely dead” line, punctuated by the sound of dying bees, out of my mind.

This album could have been spectacular, but could-a, would-a, isn’t, is what I got. The production was just too damn squeaky clean. I left wanting at least one crack at a track where the instrumentals were the rusted gears, pushed through by Hatfields well oiled smooth sound.

The lady has talent and a good voice to boot; I hope for her next LP she gets a production team that pushes her into an earthier indie sound, and tighter lines. 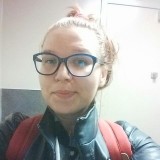 I'm a bit of an alien, a bit of a writing junkie, a lover of pies (pumpkin and grape especially), and have been known to get my high off of music and art.

Did I mention I'm a secret lover of Lil' Wayne and can't agree with him more, when he says 'I already know that life is deep but I still dig her'.

So now you know who I am, 'semi-know'. A beer would go a long way to know me more.