Jacuzzi Boys attempted to change. It was a valiant effort, but Glazin’ pushed the surf rock trio back a step. For an album that tried to delve deeper off the sound it’s predecessor and debut, No Seasons, accomplished two years ago, Glazin’s title isn’t aptly named considering the project more so resembles reheated baked goods than icing on a cake. Though their formula of early ’60s, Beach Boys rock would most certainly take American coastal bar scenes by storm, Jacuzzi Boys fall flat as artists due to their deep-seated will to convene and repeat. And when has that ever been call to reward something? (Oh that’s right, Jack Johnson makes millions off that idea.)

Foremost, where are the solos? On No Seasons, the Boys featured catchy guitar noodles on the majority of the album, more often than not during the bridges before the chorus made one more go-around. But this time, they hardly step into that showy territory, with only quick tiny glimpses of technique spouted off at the finales of “Cool Vapors,” “Silver Sphere (Death Dream),” and the fuzz solo towards the end of album closer, “Koo Koo With You.” Which isn’t to say that Glazin’ veers completely from the garage rock of their previous endeavor: on “Zeppelin,” Jacuzzi Boys channel early White Stripes more so than pay homage to the legendary quartet (which is maybe one of the more impressive compliments Jack White’s ever gotten), while “Libras and Zebras” features a Dee Dee Ramone-like bass line that carries the entire tune to its less-than-desirable climax. And it can’t go unnoticed that “Silver Sphere (Death Dream)” sounds and reads like a Flaming Lips b-side off Yoshimi.

But what No Seasons set up for the band’s strengths, Glazin’ foregoes, and that’s the defining problem here. Formula was never an issue for a band that dines on recreating ’60s surf rock, but deviating from it was. Their name represents the band’s bubbly, California beach sound, but it also calls to mind a group of guys just passed out in a hot tub. And with the smugness splattered in this album’s ten tracks (they named a song “Zeppelin” for God’s sake!), it’s looking more so like these guys could use a time machine back to 2009. 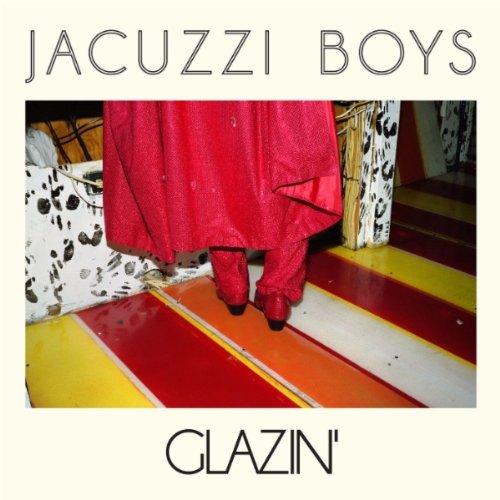