“Conatus” is a term used by the Dutch philosopher Spinoza, most famous for his work “Ethics,” to describe the drive in all animals to stay alive.  So it makes sense that Nika Roza Danilova, the one woman driving force behind Zola Jesus, who grew up in the Merrill, Wisconsin woods eating wild game, should choose that as the title of her latest album.  There is a dire chilliness to the tracks on “Conatus” which reminded me of Ayn Rand, of a forceful individualism impeded by society.

The name Zola Jesus fits into that aesthetic as well. Zola was taken from French nineteenth century novelist and social critic Emile Zola, whom I’ve mentioned here before, specifically in a review of “The Miner’s Hymns” by Johann Johannsson.  Jesus comes from Jesus.  In view of this combination of references, it makes sense that Danilova, who is only 22, spent time studying philosophy.

You won’t find, or at least I couldn’t discern, such intellectual references in the lyrics.  This is probably a good thing.  What you will find are waves of slow synthesizer punctuated by austere electronic beats behind Danilova’s practiced alto vocalizations.  At one time she wanted to be an opera singer, but her voice is probably better suited to what she’s doing now.

Danilova sites influences ranging from Throbbing Gristle to The Swans and Diamanda Galas.  I love Diamanda Galas, and you can hear the same solo power, a power perhaps garnered from an intrinsically isolated spirit, in “Conatus.”  The overall slowness of the album makes the songs sometimes seem similar.  They have an industrial, gothic sensibility that really needs powerful hooks to be truly successful.  But there are some good tracks, especially the mature melodic approach on “In Your Nature,” the echo laden crunch of “Vessel,” and what may be the best song on the record, “Lick the Palm of the Burning Hand,” a new wave ballad.

Having produced three full length albums, as well as three Eps, Zola Jesus is steadily maturing.  The band tours with Alex DeGroot on computer, Nick Turco on synth and Nick Johnson on drums.  They are currently signed to Sacred Bones Records. 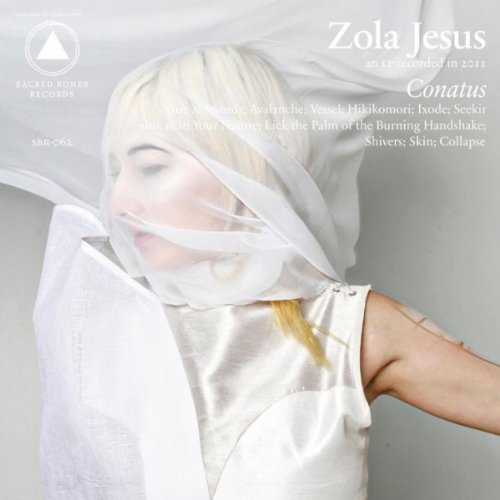