We all know Josh Tillman for his solo work, a sound that was decorated in merits of strictness and calm with an overabundance of thorny power. We can best appreciate his efforts in Fleet Foxes from 2008-2011 where Year in the Kingdom was released to major criticism from Paul Thompson due to its “lone lonesome, somber tone, one Tillman– a funny, amicable dude, if you’ve ever heard him clowning on himself at a Fleet Foxes gig– would do well to shake on occasion.”

The response to the criticism and the accompanying bout of depression in Seattle, powered Tillman to pack up his van with shrooms and wanderlust. He ventured to the western coastline, finding shelter in Laurel Canyon in what he most probably psychedelically named his home the “spider-shack.” It bears a striking resemblance to the tale in Fear and Loathing in Las Vegas, doesn’t it? Conceivably his newly acquired pseudonym, Father John Misty and the bolster of his four-year stint in Fleet Foxes, resulted in a more adventurous catalogue in the form of Fear Fun, Tillman’s eighth and arguably one of his best. Not hard to see what fuelled the album artwork… cough, cough. What is strikingly non-existent is that “lonesome, somber tone”, shedding its skin into tracks which are all favourites because of it: convivial, contagious, even playful at times.

The Greater Los Angeles area landscape, and its not so reputable spot in pop history, serves as the perfect backdrop, transforming the lyrics, music and ideas which go into Tillman’s Fear Fun. The luminous lyrics coat the morose, rambling and radiant portions of the record. The album speaks of a colossal Hollywood breakdown with splashes of his tales of shenanigans and hilarity, which are virtually non-existent on Tillman’s previous releases.

Fear Fun opens with the monotone humour of “Fun Times in Babylon,” offering up a unhurried introduction to menacing lyrics coated with a charming lacquer, filled with acoustic riffs and one which displays the depths of Tillman’s vocal range, stretching from defenseless aching during the verses, to the delightful falsetto during the engaging chorus.

This unhurried overture continues on to a spider-shack disco, “Nancy From Now On,” complete with a mass of strings and triangle strikes, and where Tillman’s playful humour and characteristic falsetto can be seen, “Oh, pour me another drink and punch me in the face/You can call me Nancy.”

The different parts of the album are easily recognizable on “Hollywood Forever Cemetery Sings,” as Tillman croons against a power-driven backbeat “Jesus Christ, girl,/ It hasn’t been long so it seems since I was picking out an island and a tomb for you at the Hollywood Cemetery.”

Tillman’s shenanigans can be spotted all over “I’m Writing a Novel”. The lyrics speak for themselves, “I ran down the road, pants down to my knees, screaming,/ ‘Please come help me, that Canadian shaman gave a little to much to me!’” An indication of quite an interesting novel.

However, where the album falls short is with its over composed and overly contained to believe the drug-induced chaos and municipal corruption. It’s quite visible that the lyrical and rhythmic arrangements stick closely to the beat with an intense stiffness, too scared to venture on their own.  He only seems to cut them free on “I’m Writing a Novel” and the playful-absurdist “Tee Pees 1-12,” making them definite standouts.

Tillman takes stabs at his lyrics in an undoubtedly unique way on Fear Fun than your standard folk revivalist. An incredible masterpiece that will fill you with wanderlust and discovery of your own paradise, your own colossal Hollywood breakdown. One thing is for certain; Tillman has definitely discovered his muse. 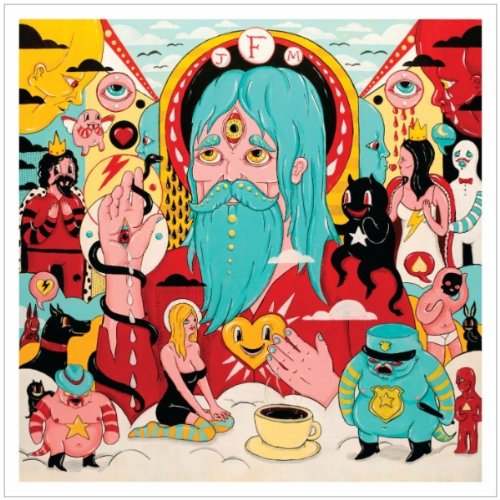