All you readers will have to excuse my tardiness and lack of expertise in doom metal on this review. But myself, music critics and music lovers included probably wouldn’t be alone if this had been 1986. ‘Doom metal’ was non-existent, never to cross anyone’s mind even when Saint Vitus came along. Often regarded as groundbreaking and credited as the one of the first bands of the genre, Saint Vitus were quickly labeled as some ‘out-of-it’ stoners, who had perfected the art of Black Sabbath reverence and perfected the sense of impending doom, where the genre gets its name. Picking apart Black Sabbath in search of its most vital elements, tuning down their guitars, achieving a thicker and heavy sound than most metal genres while sedating the tempo until sounds like a slow agonizing death.

And it’s no surprise that Saint Vitus were not esteemed when they first set foot on the scene; fantastically out of place sonic tracks, which made them sound as though they were rocking out on the worst studio equipment on the planet. However, as their fan base grew and as they stepped into their second decade of producing music, something magical started to happen, their workings started to brush off onto their little amateur followers. As you can imagine Saint Vitus was not for everyone, more of a particular acquired taste, which unfortunately put strain on their vocalists, with several changes but still retaining their place in the underground scene.

With the launch of a reunion with the original members and the tragic passing of Armando Acosta, their original drummer, a bunch of live performances and the replacement of their drummer with Henry Vasquez something must have struck a chord; for Lillie: F-65 has seen the return of Scott ‘Wino’ Weinrich from 22 years of hibernation, magically bringing back the good ol’ days of Saint Vitus, when they were at their peak. Yup, it was 22 years ago that Wino last graced Saint Vitus’ V.

And what’s with the title of their eighth album you may ask, why name it Lillie: F-65? Trust me, I screwed up on the title twice while writing this review. Well, it comes from an amusing but distinct downer that guitarist Dave Chandler experienced years ago and which fits perfectly with their incredibly slow tempo style.

You might say the older stuff is always better right? easily said, but that would do disfavor to the raw power and perfection of their newest release in seventeen long years, Lillie: F-65. It wouldn’t do enough justice to say that they finished on a high with their founding vocalist Scott Reagers and with their 1995, Die Healing, and it seems that they chose to ride that high. And instantly. Chandler’s primeval guitar storms in on “Let Them Fall”; a ‘pick-up-where-we-left-off’ story to close up the near two decade old void. And a real ‘pick-up-where-we-left-off’ story at that. It’s almost eerie how close Vasquez is at striking the skins as the epic Armando. It’s incredibly hard to decipher if it is a perfectly skilled tribute or his best attempt at putting a legend to rest. The only way to distinguish the two is by Armando’s slightly heavier style but it is surprising how good a fit Vasquez is to the line-up.

Saint Vitus definitely have something to brag about. With nothing more to gain, Saint Vitus serve up the record’s last two tracks as evidence. Injurious feedback swells up, “Dependence”, a seven-minute advisory tale of intemperance. “Withdrawal” raises the bar, stripping down any melody and lyrics for that matter. Chandler’s feedback fills out the track with two coats of feedback, the most prominent being the one that circulates easily from one headphone to the other.

Lillie: F-65 is an impressive feat, hardly a desperate ‘hey-look-at-me’ move but bragging rights on how little their sonic ingenuity has changed despite time and lineup changes, and priding themselves on their own perfect little formula. 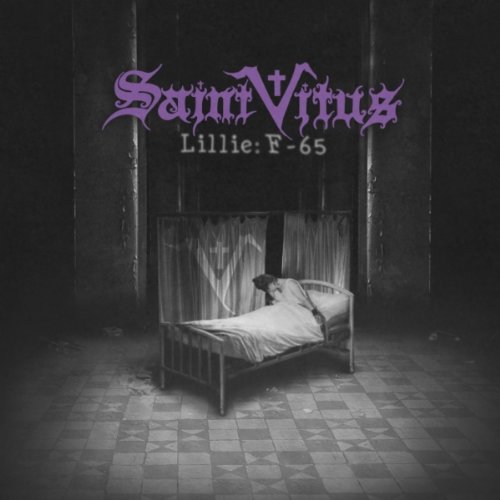