If one were to do a Google search of “The Snipes,” roughly 12,800,000 results will pop up. “The Snipes + Band” will narrow it down to a mere 1,820,000 results. And if that is too high, “The Snipes + Band + Psychobitch” should bring the figure down to about 27,000. Interestingly enough, less than five pages into your search you will have already found four punk bands in the western hemisphere named The Snipes. All of which, incredibly, are somehow credited with the album Psychobitch.

So the question is, Who are The Snipes? Are they Georgia-based punk band, The Snipes? They could very well be the Boston punk rockers with the same name. Part of me was hoping it was the English punk band that claims to hold the record for the “longest unbroken playing career in history.” (They started in 1947. Wait, hasn’t punk only been around since the mid 70s?)

As unclear as it is to who the real creators of Psychobitch are, all signs seem to be pointing to the Scottish chapter of The Snipes. A Glasgow quartet formed in 2007 by ex-members of various other UK groups. Psychobitch, which appears to be the second release this year for these ambitious Scots, is 40 minutes of disorganized, power-punk rhythms and misogynistic lyrics that closely resemble those of an 8th grade garage band. But instead of a pimply 14 year old with a cracking voice at the helm, this singer sounds like a 55 year old smoker who is in his first band ever. (I know a musician like this back in Madison. His live show is both painfully difficult to listen to and heart-warming at the same time.)

On a few numbers, The Snipes appear to make a valid attempt at creating hardcore punk rock. “Bottom Scheme” makes you want to break shit, flip over cars and light it all on fire. Other times, the songs end up coming across as weird, creepy, nursery rhymes. Case in point: “Ein Zwei Drei Vier,” a sweet tale about a German girl who likes The Ramones and likes to count to four. The melody sounds like it may have been an inspiration from a toddler’s early learning video.

Punk music is not dead. In fact it is very much alive. But in order to be taken seriously and not risk getting swept under the carpet in what is already an over-saturated market filled with less than mediocre punk bands, it is imperative for punk music to consist of more than super-jacked 4/4 beats and repetitive, mindless banter. 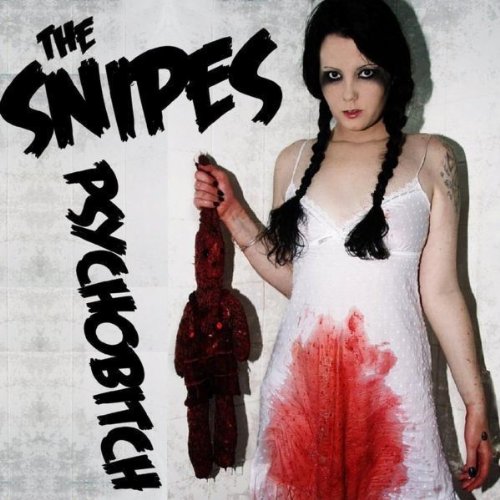