From Stockholm Sweden, the Royal Concept come to sweep you off you feet with your fix of infectious indie pop-rock, powered by catchy guitar riffs, synth-pop keyboards and contagious hooks. Pampered with indie rock influence, the quartet’s fresh hit single “Gimme Twice” will drag you straight to the dance floor, proving to be a perfect standout summer anthem.

The Royal Concept consists of David Larson [Vocals/Guitar], Filip Bekic [Guitar], Magnus Robert [Bass], and Frans Povel [Drums]. “D-D-Dance” has already reached No.2 and “Gimme Twice”, No. 3 on Hype Machine with “Gimme Twice” becoming the #1 most added song at Alternative as soon as it hit the airwaves, according to BDS. Be sure to check out their music video for “Gimme Twice” and pick up their debut EP, out now. 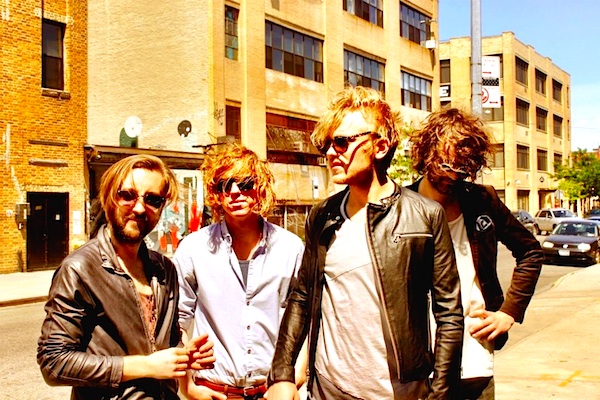 I just wanted to congratulate you guys on the release of your EP and “Gimme Twice” video. How are you feeling about your success so far? Has it set in yet?

It’s terrible really. You have to spend a lot of time in New York, playing your own music all the time, all over the world that is, no time for school, parents far away. It’s hard, but we knew rock’n’roll life was going to be tough.

Give the readers a little background on yourselves and the history of the band, and we’ll go from there.

Four guys from Stockholm in Sweden. One with Serbian/Croatian heritage. Complete instrumental nerds. Formed this band last year after having traveled all over with female artists, like Robyn. Had a different singer first, and band didn’t really feel right. Povel – bit of a drum star in Scandinavia – joined and David began to front the band, voila, we had it. We made some new tracks. Instant success on Swedish radio, and then that breakthrough with the blogs over this new year. People coming over from The States. Got a record deal and moved to NY, the first flight we could find. That’s it really.

How does it feel to have your music compared to the likes of Phoenix? Are they major influences?

We are Phoenix, just changed names a couple a months ago. Funny no one got that.

How long did it take to record your EP as a whole?

We wrote and recorded 20 songs in six weeks. We picked out the five least awesome ones for the EP and saved the really good ones for the LP. We wanted people to get to know us first before releasing a whole 12 tracks album and we’re still really proud of the EP.

If you had to sell your EP on one track which one would it be and could you tell the readers a little about that track?

In The End has a lot of feelings, and is a song that can be four minutes or 30 minutes. It’s our anthem so far. Sort of unites people. We also love the song Naked and Dumb, it’s a bonus track on the physical EP.

How did the idea for your video for “Gimme Twice” come about? Were other ideas brought up?

We had a number of suggestions related to the idea that girls had fun and basically did what they wanted with us. We wanted a video where we performed our song and since the song is about a really dominant girl in a relationship, we thought this was the best idea.

What has been your greatest challenge as a band so far?

Keeping the cool as things have gone so fast. There’s a million voices everyday that tells us their view and what we should do, and they’re all good people but also very persistent and convincing. So you get a lot of everything and you really have to work hard to keep a steady eye on your vision.

Which artists are you into right now? What’s on your iPod?

We love St Vincent and we also have to mention Rufus Wainwright, he really gave us a lot when we were younger. We’ve had a couple of weeks where we’ve educated ourselves in some new US releases so we’ve had Billboards hot 100 shuffled on our Ipods. Gotye, Passion Pit, Fun and Foster The People stick out of course.

Is there one thing you wouldn’t leave home without when you go on tour?

Our instruments and clear eyes.

What was the last job you had before doing the band full time?

None of us has ever had a job and if what we’re doing now is considered a job, we have the best job in the world.

What is one question you wish you had been asked in an interview but never have yet?

How did it feel to win all categories at the American Grammy Awards?

If you weren’t writing music and playing music what do you think you would be doing?

Filip would have moved back to Croatia and opened his own olive oil farm up in the mountains and the other three of us would have worked for him. Povel would also have an extra job as a pole dancer down at the local saloon.

What is one thing die-hard fans do not know about you?

That after every show we invite a few people backstage and do a secret stripped down show for them.

Any future plans for touring?

You kiddin’? We’ll do a run of shows in US in the fall, with different artists, Alex Clare, Fun and others, and then we have requests from many parts of the world outside US too. Check out our FB-page and by all means join our world wherever it is. We would love to see you at the gigs!

Where do you see yourself and the band in ten years from now?

Making love to big crowds, and doing small intimate gigs in between.