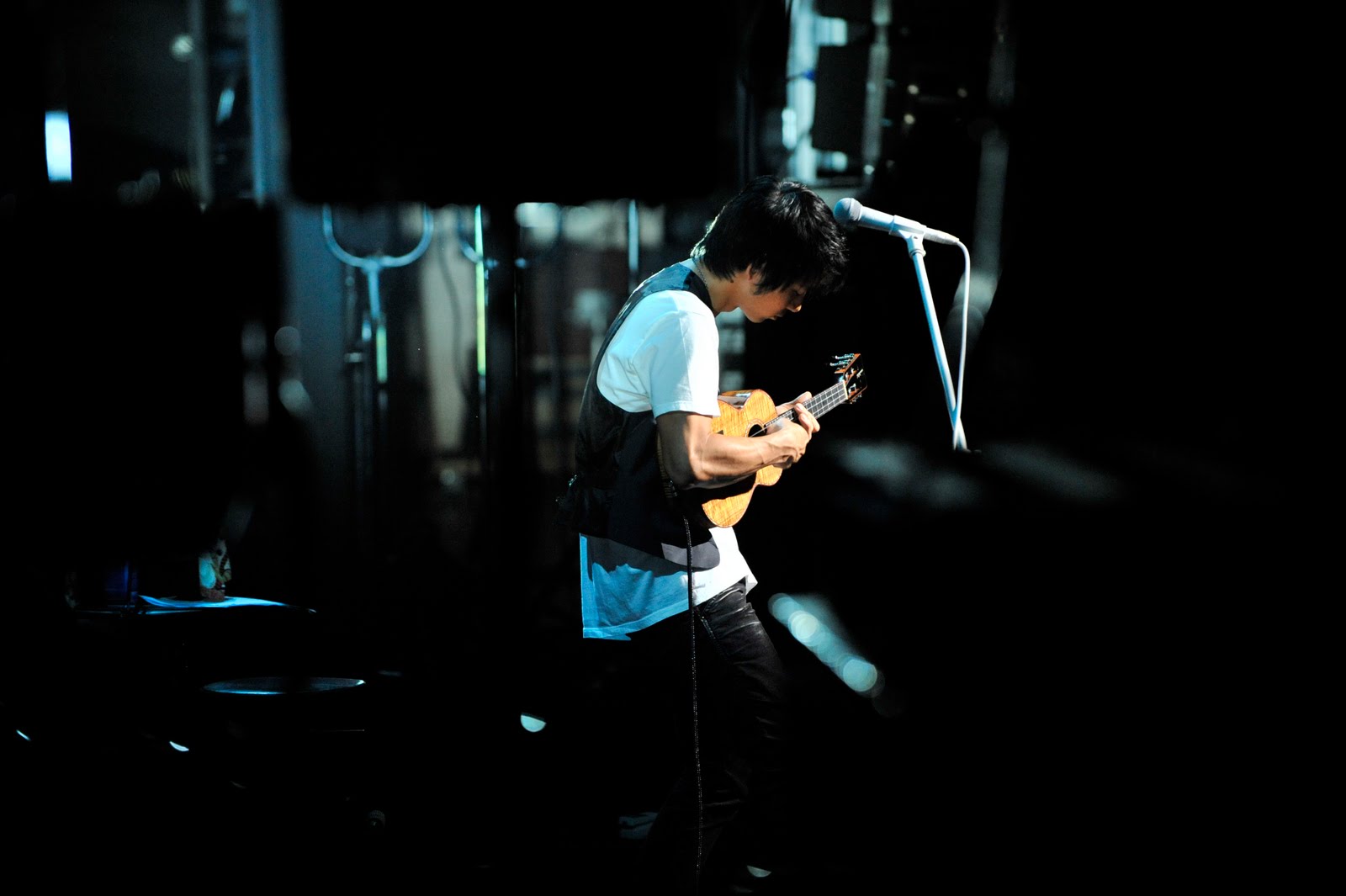 Much can be said without using words. Sound, body language and energy can all be as powerful if not more so than the spoken word. When a song abandons words, it must find a way to captivate the listener. And once it succeeds in captivating, holding the listener’s attention until the song is over is the greatest test. Jazz music has been doing this successfully for nearly 100 years. However, there is a bigger challenge for a solo musician to pull off this feat versus a group of musicians.

Ukelele virtuoso, Jake Shimabukuro, is one of those rare individuals who can dazzle thousands of people with just four strings. Fittingly, last Friday evening’s concert at Portland’s Oregon Zoo featured two solo musicians who are famous for mesmerizing audiences around the world with their incredible instrumental compositions. The other being guitarist Leo Kottke.

If there is one thing Portlanders can handle well, it’s a little rain. An hour-long, light, rainfall before the show seemed to have minimal effect on picnnickers and their elaborate food spreads. And once Shimabukuro promptly took the stage at seven o’clock, it was nothing but 90 minutes of solid musicianship. Shimabukuro has redefined the whole image of the ukelele as an instrument. Long gone are the days of breezy, Hawaiian tunes that bring thoughts of tropical sunsets and luaus. Shimabukuro has taken the instrument to a level of playing that may have never been reached before. His energy and enthusiasm is also special in itself.

Shimabukuro is good at balancing his set-lists. After a modest intro, he busted out the suspenseful “Bring Your Adz,” a song that showed newcomers to his music just a sliver of his ferocious playing. The ukeleleist purposely holds back on some songs, when it is obvious he wants to tear up the stage. While on others he shreds- yes, shreds- on the uke, at the same time joyfully, bouncing around the stage engaging the audience in the music.

Carefully plucking the strings, Shimabukuro laid out a beautiful version of Leonard Cohen’s “Hallelujah” that had the uke sounding like a harp. “Island Fever Blues” was a new song that Shimabukuro played for only the second time live. Again, his delicate plucking was seamless and precise. During “Ukelele 5-0,” the musician jumped up and down, rocking his ukelele with a wide, contagious smile.

Shimabukuro’s ability to make each string sound like its own instrument is certainly worth noting. Whether he is playing his music or covering a tune originally played by a full band, he is able to fill the necessary voids so that each song sounds complete. One example of this would be Shimabukuro’s rendition of “Bohemian Rapsody.” He played this in its entirety without a hitch. By the time the musician was finished with his 13 song set, the crowd was in awe of the truly inspiring performance.

A brief intermission paved the way for veteran guitarist Leo Kottke. While Kottke will sing on occasion, it is clear his style of finger-picking is what draws so many to his music. The musician also has a knack for good story-telling. Growing up, Kottke was raised in 12 different states. This is evidenced in many of his childhood tales as they are classic Americana.

Kottke moves about the strings swiftly and powerfully. Without hesitation, he gracefully dances along the fretboard in an assertive manner. His singing during the show is very minimal, but when it’s present his baritone compliments his playing naturally. When he’s not singing, he fills the space of a song tight with intricate notations and impossibly difficult chord changes.

Kottke has a somewhat Eeyore cadence to his speech. He shares stories of silly mishaps and (clearly) exaggerated tales. His ho-hum attitude to his misfortunes is loveable in a way. But he has a tendency to downplay his talent. I’m sure it’s a front of course. The man is incredibly talented, a natural entertainer and a hell of a guitar player.

On any given day, you can catch a show loaded with looping, sampling, and other crazy auditory and visual effects. Those kinds of live experiences aren’t going anywhere anytime soon. But to see two musicians play like Jake Shimabukuro and Leo Kottke is a rare, organic moment that you should never make the mistake of missing if they ever make a visit to your city.