I have to say that I love when bands write so much material for an album that they treat us to a double album. And, even more then that, I love when a band seems to split their personalty in two and write a double album that covers two different ideas and attitudes. “Yellow & Green”, from the Heavy Metal band Baroness is just that sort of album. As their third full length studio album (released under the Relapse Records label) “Yellow & Green” is the matured twin brothers to the preceding albums “Red Album” (2007) and “Blue Record” (2009).

Unfortunately, this album will probably split the fans in two separate factions (as is the inevitable destiny of most double albums). Yellow (record 1) will most likely appeal to their loyal fans who have been following the band since day one. It’s got some great heavy lyrics and riffs throughout the whole album and is unmistakably a Heavy Metal record (check out their first single “Take My Bones Away” the second track of Yellow). Green (the 2nd record), coming off with a little more pop, will appeal to new fans and people who are not quite ready to admit they are into the Heavy Metal genre (of course this review will make some ‘true’ Metal fans balk and dismiss even the idea that Baroness is a Metal band). Overall this is a pretty interesting album, I would recommend listening to this album backwards (not literally, as in trying to find Satan by spinning the record in reverse, but just by starting with Green, then moving on to Yellow) as it moves from Heavy to Heavier. Also, very interesting to note, and earning much respect, the album art (as with all of their previous albums’ art and many other Metal bands albums’ artwork) is created by frontman John Dyer Baizley. 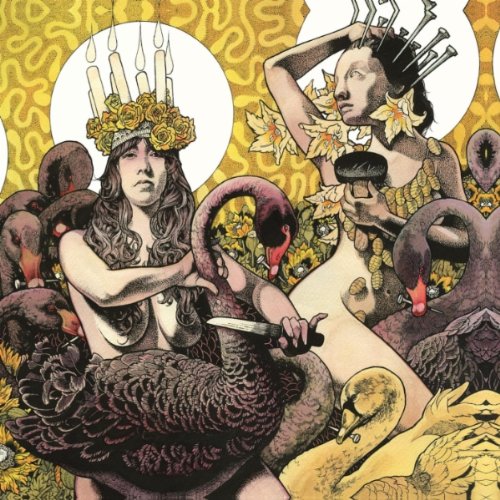