Are you ready to be drenched in an emotional waterfall?

If not, grab an umbrella. Because that’s exactly what Citizen Cope’s newest release, One Lovely Day, brings to the table.

If you haven’t heard of him, Citizen Cope is the stage name for Clarence Greenwood, singer and songwriter hailing from D.C. with a background in hip hop, blues and folk. You may recognize his sound subconsciously, having heard his work on various television shows ranging from Entourage and Criminal Minds to One Tree Hill and Scrubs, as well as a handful of popular films. However, considering all of this exposure via other media outlets, one finds it perplexing as to why Citizen Cope hasn’t become a familiar name.

Greenwood’s music is palpable, mostly due to his bluesy, twanging, rambling voice. It catches your attention, yet only fleetingly unless backed by tantalizing harmonics. The proof lies in One Lovely Day, which many fans have deemed a departure from his earlier efforts to push the limits of creativity, only to be replaced by what some consider a safe audience pleaser.

If you listen to Greenwood’s earlier work, you might agree. Take tracks like “Let the Drummer Kick,” which went gold off of the 2002 album Citizen Cope and draws on hip-hop influences, resulting in a sound similar to Fort Minor. A year later we have “Sideways,” a popular collaboration with Santana in which Greenwood croons, “these feelings won’t go away…” for a sobering, shuddering elude to having strong, helpless feelings about someone.

Well, apparently the feelings still haven’t gone anywhere, but Greenwood’s sound has on this fifth addition. One Lovely Day takes a more relaxed approach to musical expression, joining the ranks of soulful pop figures like Jason Mraz, John Mayer and Jack Johnson, a transition that’s noticeable without even listening to his previous work. It’s almost as if he’s chosen to present his soulful lyrics under the guise of the mainstream aesthetic.

The ten-track album opens with it’s namesake. “One Lovely Day” is a meandering dream, it’s an easy listen lacking in the raw character that Greenwood is more than capable of embodying. “Something to Believe In” gives off a surprisingly nice reggae vibe, contrasting with its message of collapse and exhaustion. “Back Then” holds true to its title, giving off a distinctly 90’s feel, and “DFW” flows considerably better than the other tracks from the very first strums of the bass guitar. We have a lot of different influences here, culminating in the most notable track, “Peace River.” Drum snares add to the more symphonic, catastrophic beauty of the song, giving us a taste of just how well Greenwood can harness his raw talent.

One Lovely Day, to put it simply, is an aptly fitting title for this album in two ways. For one, if you take a listen through, it comes in waves, undulating from blues to reggae influences as easily as one day fluctuates from the next. Second, it’s a good listen for a lazy, pleasant afternoon, and I wouldn’t expect much more from Citizen Cope anytime soon. 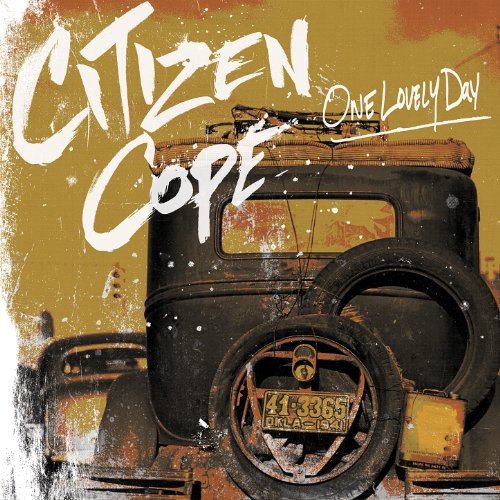