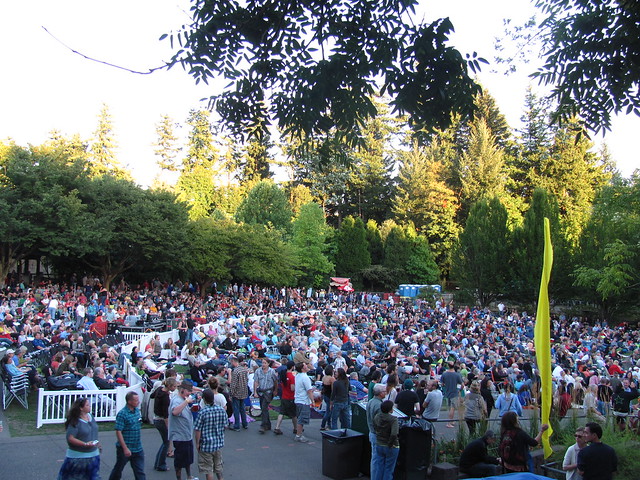 Few bands have built a reputation for consistently explosive live shows like Robert Randolph & The Family Band and Trombone Shorty & Orleans Avenue. So it only made sense that the two groups were billed together for one of the final shows of the Oregon Zoo’s 2012 Summer Concert Series. As the number of sunshine-filled, 70 degree weekends in the Pacific Northwest slowly dwindle, Portlanders could not have asked for a more beautiful Friday evening for an outdoor show.

Let me preface this: If Robert Randolph wants you to have a good time, then he’s going to do everything short of stopping the show (which he used to do in the band’s early days) to ensure everyone in the crowd is feeling it. Hence the opening song, “Good Times,” which set the precedent for the evening as fast paced and no-holds-barred. Randolph’s enthusiasm is contagious. A smile rarely left the face of the master musician who was clearly loving every minute while on stage.

As for the Family Band members, a look of anticipation was undeniably on their faces. Each seemed poised and ready for Randolph’s next, unanticipated move. As Randolph soared gracefully on the pedal-steel during “The March,” he kicked away his chair and let the band take the lead while he encouraged the crowd to get up and dance.

In its simplest form, RR&TFB ‘s music makes you feel good inside. But what Randolph does on his guitar, slide or electric, is anything but simplistic. As the band’s set neared its close, RR&TFB jumped into a monstrous version of “Voodoo Chile.” At one point, while Randolph was on his knees wailing on the guitar, an enthusiastic fan beside me leaned over and shouted, “That’s some Jimi Hendrix shit right there!”

I couldn’t have agreed more. As I waited in line at the bathroom during intermission, the lights cut out unexpectedly. James Brown’s recorded voice on the speakers faded away. Realizing that the zoo losing power wasn’t included in the evening’s program, I wondered when the next band would take the stage. But soon, the bathroom lights flickered back on and the ATM outside sputtered to life. A trumpet blast emerged from the darkness that brought a roar from the audience. And then a vocal-less intro, led into a wild, funky tune, was all the motivation I needed to hurry back to my spot near the stage.

On stage was Trombone Shorty and Orleans Avenue, a young band of exceptionally talented musicians, all of whom excelled at their instruments early in their careers. Yet on stage, night after night, each continues to test his own individual limits as well as those of the others.

TS&OA bleeds New Orleans with every song they play. A little bit racousy at times, a little bit jazzified and everything else in between. During “My Feet Can’t Fail Me Now,” Troy Andrews aka Trombone Shorty, fired his trombone like a machine gun at the energetic audience while showing his Mick Jagger dance moves. And while Andrews is certainly known for his trombone playing, his trumpet skills are nothing short of amazing. In between scatting and displaying his ridiculously smooth, melismatic vocals, the musician used circular-breathing to move his trumpet up and down the major-minor scales.

The members of Orleans Avenue are equally impressive, of course. In what was an unexpected yet killer version of Nirvana’s, “In Bloom,” Andrews and the five other members of the band (tenor & baritone sax, guitarist, bassist and drummer) took turns exchanging solos in a rapid-fire showdown of skillfully shared musicianship.

I can’t imagine what the chimpanzees or the polar bears or giraffes were thinking when they heard all those strange noises coming from the concert zone. But all I could think as I walked back to my car Friday night was that I couldn’t wait for the release of the 2013 Oregon Zoo summer concert lineup.