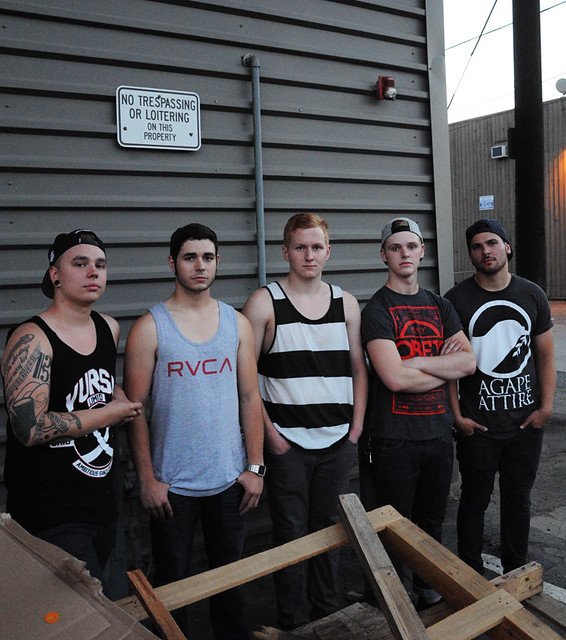 Bands come and go, especially in Seattle. It’s a tough gig surviving the work that goes into getting a group together, practicing and trying to get club dates. It’s a lot easier if there is talent to back up all the idealism, such is the case with Love The Lost. A band of five musicians, young but very focused, their music resonates with metalheads as much for the energy and volume as the lyrics.

Formed in 2012, Love The Lost is a Seattle-area post hardcore/metalcore band who performed at Studio Seven’s Battle of the Bands In July 2012. Coming in second place to a more experienced band, the group graciously agreed to an interview after their set.

LTL:        This was our first show together and we’ve been practicing hard. We loved seeing the audience getting involved, especially all the bouncing up and down during ‘Monstrosity’.

What are your influences and who does the writing?

We do our own writing. Each person writes their past and then when we come together, we fine tune it and blend it. One of our influences is Armada; they have a lot of fun when they write and perform. We want to give our fans the same kind of satisfaction and we like the high energy we get back from them. We all come from metal backgrounds (Cody Hilliker: “I’m from a Christian metal band”), so we all bring in something a little different from the same genre.”

What’s your favorite song? And what about CD release dates?

Our favorite group song has to be “Arrogance”.  We have an EP recording session August 7th with the release later this year and then have about 9 more song ready to go for a CD. We are working on making a download available from the web site.

What’s the meaning behind the name?


We are not a death metal band. We want to reach out to people and love them through the music; we think we can reach a lot of people who otherwise don’t get enough love. We have a humble approach to what we do. We love to meet other musician and their fans, we appreciate those who come out to support the music and we’d meet and shake hands with every single fan if we could.”

Love The Lost has a variety of club gigs scheduled in and around Seattle/Tacoma. Expect to hear more from this group and watch for more music to be released later this year.