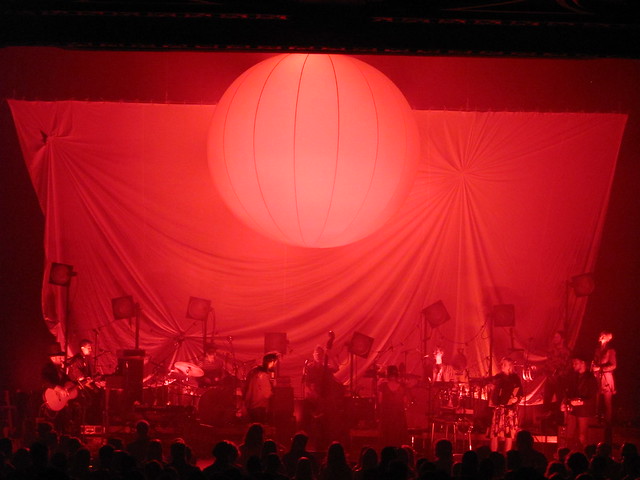 “Come dance with me…”

When you’re Alex Ebert, it only takes a simple four word invitation to send an entire audience into a mild frenzy. Arlene Schnitzer Hall, a Portland venue known for sit-down shows and regular visits from the symphony, was temporarily ground zero on Tuesday for the circus-like atmosphere and intoxicating merriment of California band Edward Sharpe & The Magnetic Zeros.

The group’s approach is non-conventional. A wildly energized prophet of a singer at the helm of a 12 member psychedelic folk troupe attracts a following of blissed-out dreamers and romantics who cling to the singer’s words for all their literary worth. And while this description could certainly be associated with other acts, the hypnotic grasp Ebert has on his audience is like nothing I have witnessed before. It’s as if the singer obtained his leadership skills first hand while following Moses through the wilderness. His ability to round up complete strangers and unify them through song is astounding.

And what’s more, beyond all the good vibes and hippiedom is a band with serious depth; legitimate folky wordsmiths working in swift poetic action while blanketed in Disney character happiness. A topic touched upon several times by Ebert was human mortality. He spoke candidly of the time his father explained to a 5 year-old Ebert that all people will inevitably die. There was a peaceful tone in his voice that suggested a once distraught Ebert was now content and accepting of this notion.

Ebert’s unpredictable nature is felt and reciprocated from the band members to the audience. As the leader randomly jumps from song to song, the other players on stage clearly have no idea where the singer is headed, yet they appear unfazed by his decisions. The Magnetic Zeros ran through a large catalog of songs; tunes like the wildly popular “Home” and “40 Day Dream” to newer compositions like “Man On Fire” and “Mayla.” Ebert’s seemingly endless supply of energy had him twirling around the stage, often locking eyes with smitten audience members and the equally infatuated Jade Castrinos. Once a couple, it’s hard to ignore the natural chemistry between Ebert and Castrinos who sang in unison with each other throughout the night.

It’s obvious that Ebert is most comfortable when he immerses himself with his awe-struck audience. On several instances, the singer could be found in the aisles dancing with fans or staging a sit-in with Castrinos 25 rows up, audience members circling around the two as the they crooned affectionately to each other. Even this writer, overcome with joy at one point found himself locked in an embrace with Jade who just happened to be nearby.

As cheesy as it sounds, you need to see this band live to truly feel the sincerity behind their songs. Edward Sharpe & The Magnetic Zeros has the capability of impermanently separating you from your reality while making you part of their own, simply through the power of music. And that is an organic experience that is hard to beat.