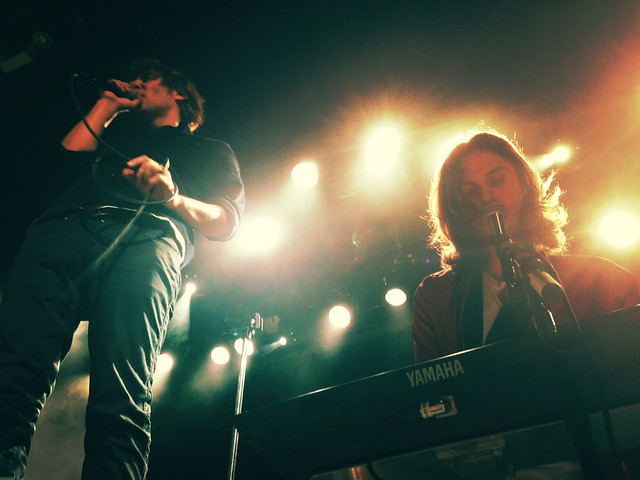 It was after a particularly long night out and about Manhattan that I hopped onto the L train with two friends at 6:45 AM from Union Station to make the trek to Brooklyn for the most sought after of music events: the exclusive intimate show. Around 11:30 the night before a friend had texted me asking if I wanted to go see a free show by Phoenix on the next night. Never one to turn down a free anything, I jumped at the opportunity and so at 7 AM, I found myself waiting outside the Williamsburg Music Hall, coffee and artisanal savory tart in hand waiting for wristbands. The show had been publicized on the band’s Facebook and wristbands were slated to be distributed between ten and eleven AM to the most devoted of fans. As the line slowly grew longer and longer, I finally appreciated my friend’s determination to be early when we were in the first 100 people and got tickets to the exclusive show later that night.

Phoenix took the stage around 6 PM and proceeded to blaze through a seventeen song set in just over an hour, drawing songs equally from Wolfgang Amadeus Phoenix, It’s Never Been Like That, and their forthcoming Bankrupt!. In their first New York show since selling out Madison Square Garden in 2010, the band was energetic, passionate and did not appear to have lost a step in their year long hiatus from touring. Playing eight songs from their new album, fans were treated to a taste of what to expect when Bankrupt! is released on April 23rd on Glassnote Records, even opening the show with their latest synth pop gold nugget, “Entertainment.” The band, made up of two guitarists, a bassist, and a vocalist with touring percussionists, managed to hold the exclusive audience’s attention rapt through the early going by following the newest single with a few crowd favorites (“Lasso”, “Lisztomania”, “Long Distance Call”) before launching into showcasing their new album, a new take on the classic Phoenix sound. After running through most of the new album, the focus was clearly back on Wolfgang, with the band closing their set with “Armistice” and “1901” before retaking the stage for a bare bones almost acoustic version of “Countdown”, for which singer Thomas Mars descended into the waiting crowd and then returned to the stage for the final song of the evening, “Rome”.

In spectacular form, Phoenix showed that gone are the days of danceable pop singalong followed by danceable pop singalong, replaced instead by a much more experimental group attempting to cope with the international success of their previous album. While the concert was less Williamsburg house party than one would expect based on their previous albums, the band showed that as far as indie rock goes, they are absolutely a force to be reckoned with and we should be excited for whatever comes next from them.

Click here for more photographs of Phoenix live in NYC

Ross Perkel is a recent transplant from Madison, Wisconsin dropped into New York where he attends university. He has a demonstrated fondness for kites, paper planes, and has trouble talking to pretty girls. His largest current project is the growth of his first beard.