I am a generally forgiving music nerd. One who understands that not everybody is, or even should be racking up scores of sleepless nights over the The Complete Hank Williams catalogue, exciting contemporary trends in hip-hop, or any other such nonsense. But even I will make an unnecessarily labored sigh accompanied with an exaggerated eye/roll before derisively having to outline Billy Bragg’s practically mythic CV. I know it’s a snide gesture, but I really can’t help it. Sometimes, my voice simply won’t operate within an octave that does not imply that I’m shocked you don’t already know what I’m telling you.

So instead of going that route, I’m going to simply operate under the assumption that you already know about Billy Bragg’s longstanding career beginning as a semi-punk, folk-protest songwriter with a hard-hitting, yet heartfelt agenda aimed toward political reform. I’ll skip all the details about his innovative folk-oriented style, and the crucial intellectual attributes he brought to what was then, a much narrower punk genre. Heck, it would be ridiculous for me to even think it possible that you don’t know about Billy Bragg’s ’98 collaboration with Wilco to interpret an expansive collection of unreleased material from a little known songwriter by the name of Woody Guthrie, in the Mermaid Avenue Sessions. Thankfully, since you know all that stuff already, I won’t have to speak in that shit-eating octave to anybody, and we can just start fresh, here and now: The year is 2013, and Billy Bragg has released a new album. What a time to be alive…

Spanning a significant 30 year career that has been ripe with accomplishment, esteemed British musician/songwriter and infamous left wing activist, Billy Bragg has released his anticipated 15th album Tooth and Nail under familiar label ‘Cooking Vinyl,’ after a five year studio hiatus. Interestingly, this is the first album to be recorded completely live, with no overdubs, since Bragg’s debut ’83 release of  ‘Life’s a Riot With Spy Vs Spy.’  Pair that with the fact that it was put together within a 5 day session in the basement of renowned California producer, Joe Henry, and you’ve got to acknowledge that Billy Bragg– at age 56 mind you, is still doing something right.

Though Bragg returned to the studio favoring the live-take session style we haven’t seen from him since his debut album in ’83, the product, and the formula couldn’t be more contrary. Bragg’s typically sharp set of socio-political sheers have been pointed inward, aiming to tailor a much mellower, introverted, narrative perspective that focuses more so on rural pleasantries, and comfortable home-spun tails of love and heartbreak. Clearly, Billy Bragg is reclining into the later years of his career, which would be cause for concern if the sound wasn’t so warm with confidence and reconciliation.

Tooth and Nail is an undeniably wholesome helping of Americana/folk portions putting it’s weight on the haunches of simple, romanticized, country-roots sound, while remaining tactfully poised to indulge in as much casual blues and backcountry gospel flavor as Bragg and his small ensemble care to cook up. The once young brit folkie wielding an electric guitar, a sonic edge, and a contempt for the status-quo has finally gone acoustic, and instead of playing with his standard backup band, The Blokes, he has worked with producer Joe Henry to curate a small handful of serious talent. The opening tracks, “January Song,” and “No one Knows Nothing Anymore,” are filled with as much wit and commentary as ever, but Bragg’s politics seemed to have shifted to a less direct, and ultimately, more naturalistic vehicle. Along with Billy Bragg’s exceptional songwriting in the opening numbers, the dynamic handling of production is particularly noteworthy. Only with such honed accompaniment could Henry have successfully given us the perfect blend of intimate solo Billy Bragg sound that we all really want, while still utilizing the four piece ensemble enough to take us to those truly elegant musical moments that peak in harmonious luster. Rarely does one have the privilege of hearing a backing band with the ability to step in and out of the spotlight as creative accomplices to a sound that often requires less than more, in order to achieve a sense of breadth, or an essential tone of solitude; Tooth and Nail does this all too intuitively.

Track Three, “Handyman Blues,” is a simple, meandering country-blues love song featuring a slow twangy steel guitar and a warm story about an inept handyman reconciling his inability around the house. “I Ain’t Got No Home,” a Woody Guthrie song that Bragg covers, is re-worked with a notably defeated tone that tragically still rings true in todays world. Track six, “Do Unto Others,” is a definite stand in capturing an authentic mountain gospel family band feel, and aside from flexing some folk-versatility, the song is one of many on the album that highlights a vibrant tone of regional color showcasing the diversity of American folk traditions.

Tooth and Nail goes on to end strong, featuring a pumped up Springfield-esque stadium style rock anthem entitled, “There Will Be a Reckoning,” which is one of several political songs on the album. Though much of Tooth and Nail carries a slow and solomn pace, the final track, “Tomorrow’s Going To Be A Better Day,” ends things on an upbeat note.

For how astonishingly solid the album plays from beginning to end though, Tooth and Nail is criticized for lacking the political focus, and general spunk that much of Billy Bragg’s earlier work featured. That might be valid if A) the album wasn’t actually good,  B) he wasn’t 56 years old, and C) he hadn’t been making a notable shift toward a less abrasive, introspective, folk-hearted style for damn near 15 years now. Ever Since his collaborative work with Wilco on Guthrie’s material, Bragg has been focusing on a more mature, introspective style of songwriting. People associate Woody Guthrie with protest music in a scatological, wikipedia-bent frame of thought, but how many have actually listened to anything aside from ‘This Land is Our Land?’ Guthrie’s ‘protest songs’ from Dust Bowl Ballads, or The Asch Recordings tell stories about people, hardship, defeat, and struggle– not politics. The point is: you don’t have to have a political focus to carry a political message.

Now I won’t say Tooth and Nail is, or should be compared to anything of Guthrie’s. One can only imagine what a maddening curse it is for a big name folk singer to be pigeon-holed by the brilliant work he has done putting Woody Guthrie’s written material to music. What I am saying though, is that Tooth and Nail is an incredibly solid album featuring some delightfully candid moments for Billy Bragg as a songwriter– and come on now, really, do you not see the potential for him to charge this recently honed, personally geared folk-root style with political content in the near future? I get paid the big bucks for my literary finesse, not pointing out the obvious! 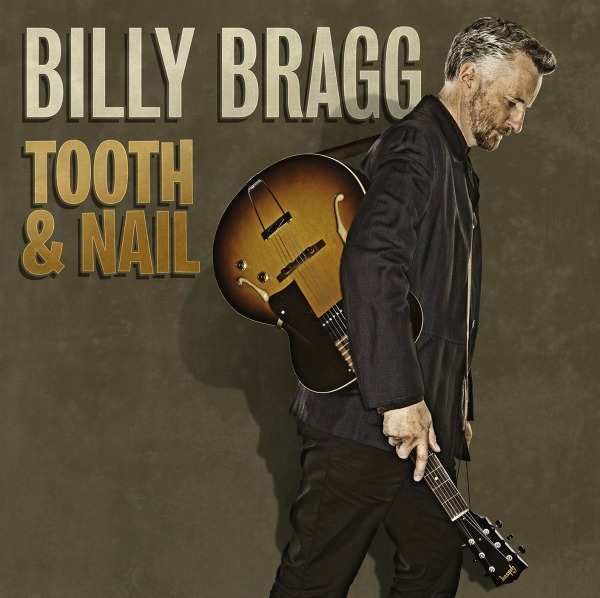