It’s too bad the members of this band were not born a few decades earlier because they would have been pretty big when MTV first hit television screens back in the early 80’s.  Yet their back to basics rock approach may still give them a slight advantage over most of the polished rock acts that are out today.  Bleached is a band comprised of three girls and one guy (the girls play guitar and bass while the guy plays drums) whose style of music could only be described as pop punk.   It has this 60’s  California surfing music vibe mixed in with 70’s New York punk rock style.   If somehow The Ramones got together with The Go-Gos this would be a good indication of how that collaboration would  sound like.

Bleached’s debut album Ride Your Heart has a good mixture of fast punk songs, and mid tempo pop ones.  “Looking for a Fight” and “Waiting by the Telephone” are great examples of the more hardcore edge this band represents.  While songs like “Next Stop”, “Outta My Head”, and “Love Spell” are really good indicators of how good they are at song styling and structure.  Even incorporating background vocals effectively into a few of  those.  They even have songs that seem to be influenced by  the 60’s psychedelic movement mixed in with 80’s new wave with tracks like “Dead in your Head”, “Dreaming without You”, and “When I was Yours”    If you are worried that this album would stick to only one structure, it’s clear they don’t.

The punk pop sound is one that I hope gets  a comeback this year, but more than that.   I want to see more women play instruments and form their own bands.  There are a slew of really talented female rockers that are mostly ignored by the press and it would be great if these ladies would get the notice they so much deserve.  Bands like Sick of Sarah, Fuzzy Machete, Vanity Theft, and Heavy Cream are just a few of the thousand bands that have female members in their group.  Not just ones that only have one bass player, but ones where the women are more dominate then the men.   There are many out there that still  believe men are the only ones  who can play rock music, and women are the only ones who can write a pop song.  It’s great to know that there are bands out there that are bridging that gap between the genres.   In the near future we will  start to see these genres cross so much that radio stations will no longer be set up by demographics. Soon the line between what is pop and what is alternative will quickly fade.  It’s nice to know that bands like Bleached is leading that charge. 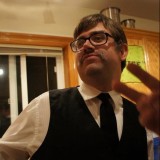 I have spent many years writing about movies on other sites and have recently begun writing music reviews. My favorite bands include but are not limited to Stereolab, Daft Punk, The Jelly Project, Sleigh Bells, Portishead, Rapedoor, and Baby Metal. Twitter @videovangaurd