Melbourne garage rock duo Super Wild Horses have made great strides from their decidedly humble beginnings.  After first meeting while attending an all girls Catholic school together Amy Franz and Hayley McKee formed the band without any experience playing instruments but with a passion for loudly singing along with one another in the car.   The pair picked up the craft quickly with each sharing duties on vocals, guitar, keyboard, and drums. Eventually, the efforts led to their 2010 debut Fifteen.  The album sounded more like the work of skilled veterans than neophytes with catchy fuzz-filled tunes from start to finish.  Now after three years the band has returned with their sophomore album Crosswords, released on Dot Dash/Remote Control Records.  Across 13 tracks the album retains the original sound that brought them praise from far outside of Australia.  At the same time the pop hooks often hidden on Fifteen have emerged from the haze via a varied selection of song styles. The twosome has taken great strides forward with Crosswords, just as they leaped from the front seat of their car to widespread acclaim with their debut.

Crosswords kicks off with the bass-driven single “Alligator”, a melancholy track directed at a now distant lover.   The scathing tone backs lyrics lamenting “You’ve got me jumping through hoops, just for a little piece of you”.  Romantic frustration is a common theme that continues throughout the album.  On “Don’t Gamble” the dual vocals on top of a bouncy guitar rhythm chastise someone foolish enough to gamble away their mother’s wedding ring.  As the lyrics grow angrier with the subject whose luck has run out the guitar and vocals match by sounding increasingly harsh.  Franz and McKee up the ante with their take on Smokey Robinson’s oft covered “You’ve Really Got a Hold on Me”.  They manage to turn out a version that fits well with the album’s other tracks focused on frustrated lovers, adding their own “I want to quit now, you don’t do shit now” line.

The highlights of Crosswords come on the latter half when the songs break away from their usual format. “West Coast” features a guest male vocalist to trade off lyrics of longing for one another with.  A wide array of noises make up the oddly titled “Ono In a Space Bubble”, including guitar reverb, high-pitched squeals, and wailing vocals, and whispered chants of the title.  “You Have Two Feet (So Run)” revolves around halting guitar akin to the riffs of the band’s musical forerunner Sleater Kinney/Wild Flag’s Carrie Brownstein.  The album’s most playful track “Wakiki Romance” fits its title with a sunny surf rock feel before the proceedings fade out with the short ballad “Setting Sun”.  Evolving throughout, Crosswords fittingly mirrors Super Wild Horses short career trajectory. 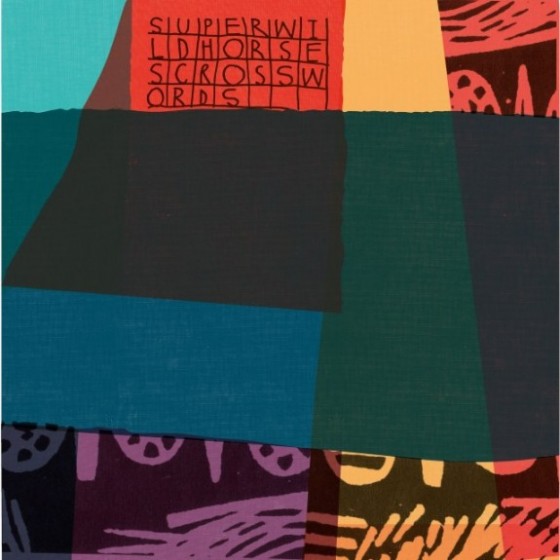