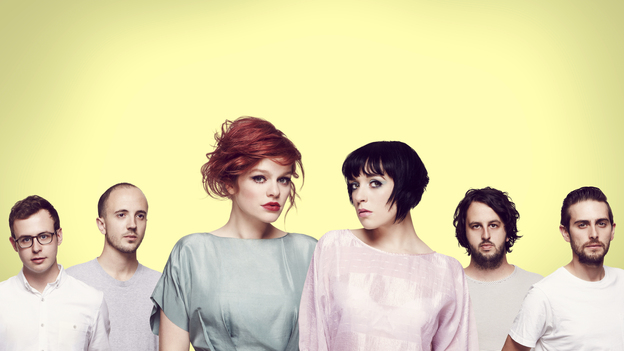 “Floaty vocals and sparkly-sounding pop compositions that are a real breath of fresh air.”—NYLON

“…some of the most engaging female/male dual harmonizing heard in recent epochs.”—LA Weekly

A Is For Alpine, the debut album from lauded Australian band Alpine, is available now on Votiv. The new release, which was recently chosen as iTunes’ Australian Alternative Album of the Year, has received early critical praise from KCRW, with Pitchfork calling it an “unforgettably light and charismatic gem.” The album recently streamed in its entirety on NYTimes.com and the latest video for the track “Gasoline” premiered on NPR.org as a “First Watch”

To celebrate the release, the band will support Spanish rockers Crystal Fighters on a U.S. run beginning in June in addition to an opening slot for Grouplove at Celebrate Brooklyn on June 13. Since forming, Alpine have toured extensively with the likes of Kimbra, Sia, Cloud Control, The Naked And Famous and Matt Corby. Additionally, the band wrapped their first U.S. tour in March including a stop at SXSW 2013 and has appeared at various festivals worldwide including Splendour In The Grass, Southbound and Falls Festival. See reverse for tour routing.

Alpine is Phoebe Baker and Lou James (dual vocals), Christian O’Brien (guitar), Ryan Lamb (bass), Tim Royall (keys) and Phil Tucker (drums). The new album was recorded in Melbourne with producer Dann Hume who helped the band experiment with sounds and textures. Of the record Lamb notes, “We wanted to represent the different sides of our music, so there’s some sad moments, some dancey moments, some rocking out and lots of harmonies.” No strangers to the benefits of shared ideas and the collaborative process, Alpine’s own methods for song writing reflect the strong and respectful working relationship they had with Hume. Baker describes the new album as the band’s “innocent and not so innocent explorations through our twenty-something emotions.”