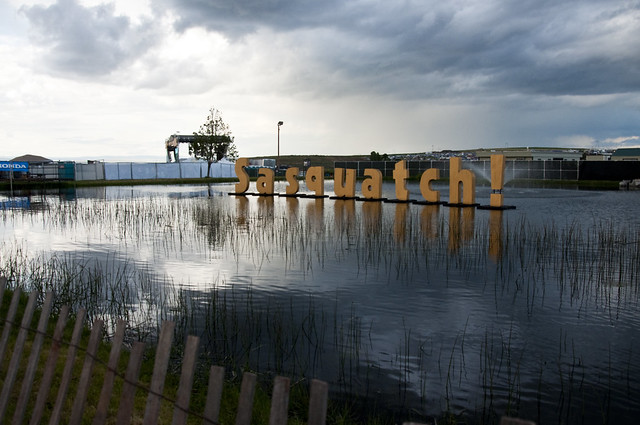 Temperature, precipitation, personal hygiene: these things mean little to the seasoned festival goer. Walking in through the gates of Sasquatch this year, I simultaneously felt nostalgia and excitement (with a hint of nausea as a particularly ripe gentleman blew past me screaming Bloody Mary) knowing that the world of large scale festivals in an enigma, shrouded in furry animal suits, just waiting to shock the feint of heart.

The drive down from Vancouver to The Gorge Amphitheatre is one that, although prepared for by the onslaught of news stories the previous night, nearly took the wind out of our sails. Crawling through the streets of Mount Vernon, WA at a snail’s pace while staring, jaws agape, at a clean break; a fully MISSING section of the Skagit River bridge, well, let’s just say we were in no rush to cross the next bridge the I-5 offered up to us. The extra few hours in traffic meant that we unfortunately missed the opening act on the main stage. All the stages, for the uninitiated, are cleverly named to keep company with Ole’ Sasquatch (the main stage): Bigfoot, Yeti, El Chupacabra, and Cthullu (yes, the Lovecraftian reference causes an involuntary tilt of my head as well being lumped in this group… has anyone ever claimed to see the great god-creature from another dimension?). From 4:00 on Friday afternoon until the final act at 11:00 on Monday night, there’s music and comedy to satisfy the pickiest of festival snobs with recognizable names on EVERY stage; a feat not easily accomplished and yet not surprising considering the track record of this incredible venue.

ZZ Ward, although I didn’t catch the act personally, clearly wow’d fans and newcomers to her music alike as it seemed to be the name no one was likely to forget, or even stop talking about regardless of the act they were catching at the time. The first act caught in person was actually a surprise when, rounding a corner headed towards the Sasquatch stage, who do I find playing an intimate little set in the Acoustic Tent but Vampire Weekend! Subdued, restrained, and light-hearted, I wasn’t aware yet that this was how I wanted to see the group. Not, unfortunately, onstage, barely able to hold on to the quickly dwindling crowd they amassed later on that evening. Built to Spill, the Boise based boys, are a band that’s been around the festival circuit a few times now. No scathing commentary on their age here though, as they still sounded youthful and energetic despite the gray in their beards (I had to… just one…). Watching hipsters with hats made of Duck Tape, next-gen flower children with closed eyes and open arms, and a mass of side-boob showing, fur-coat wearing (this is likely headliner Macklemore’s influence), impossible to categorize characters dancing to their music, I wonder if the guys from Built to Spill think that any of this is any more out of the ordinary than decades past? With a sound akin to The Tragically Hip (or is that just the Canadian in me linking the two), their indie-guitar rock sounds parted the rain clouds (literally… it really did stop raining at this point) and a rainbow appeared that, to my thirsty eyes, ended at the beer tent. All would be right with this weekend. Of that, I was now assured. Father John Misty, real name Joshua Tillman, formerly of the folk group Fleet Foxes was the first act I caught on the second largest stage, The Bigfoot. Girls actually swooned, the backs of their hands subconsciously finding their foreheads (I didn’t know women still did that to be honest) the moment Father John took the stage. Meandering from one side of the stage to the other, one hand in his jeans pocket, one hand delicately holding onto the mic, flamboyance and confidence came together in this bearded poet who slings his verse with dreamlike chords backing him up. The only payment this man seems to crave; the applause and energy of his adoring fans. As the show continues, notching off just about every song off of his 2012 release, Fear Fun, I can’t get over the demeanor and presence of what could’ve been a terribly convincing cult leader in another life. He shakes his hips and points his guitar like a young, folk-rock Elvis Presley, his bravado keeping the mood light and the crowd smiling. His music isn’t anything to wag a finger at either. Alternating between hands-free, outlandish gestures while singing and an acoustic guitar that he lets sing in its own right, Father John, whom I now refuse to refer to by his given and rather unfitting name, Joshua, is a man made for the spotlight. All his eccentricities and the infectious music he brings to the stage will only help his star rise to dizzying heights.

Taking the energy level up about five notches (initially, at least), Arctic Monkeys took to the main stage only moments after Father John blew a kiss goodbye to all the ladies at Bigfoot Stage. Continuing the throwback-frontman trend, in my eyes at least, vocalist Alex Turner channeled Buddy Holly save only the glasses. Pulling a black comb out of his back pocket to slick his hair back in place these (still) young Brits came out blasting tracks off their freshman album Whatever People Say I Am, That’s What I’m Not, to get the crowd going frantic. “Fake Tales of San Francisco” brought me back to memories of Roskilde Festival outside of Copenhagen, Denmark back in ’06: the first time I saw these guys live as they toured the globe promoting their first and only album at the time. A much more well-rounded show than seven years ago, the boys properly chilled the crowd out before picking them right back up with lead-ins of, “This next song’s called ‘Pretty Visitors’ and you’re gonna fuckin’ love it!” The backbone and fast-beating heart of the operation, drummer Matt Helders relentlessly punishes his kit as Turner takes the centre walkway shaking babies and kissing hands. The Brit Award winning, Grammy nominated group know what their strengths are and showcase them with songs like “Brick by Brick”, Helders kicks it into overdrive and for the first time, I notice he’s wearing a mouthguard. Clearly seeing his job as a high energy, high octane endurance event that it is. Although everyone was waiting for, and loving, the college anthems Arctic Monkeys are so good at pumping out, their newer efforts really brought the crowd in to an intimate space that the band has carefully crafted for their fans. As mentioned earlier, the New York based band Vampire Weekend took the headlining spot on the Bigfoot Stage and, after opening with “Cousins” off their first album, the crowd’s energy and the sheer number of them had me wondering if these boys could really be referred to as a “secondary-stage-act”? “Cape Cod Kwassa Kwassa” followed and not long after, “Horchata” off their sophomore album came next, then the first of their new hits of their week old album Modern Vampires of the City, “Diane Young” had everyone screaming their heads off. Unfortunately for the band, the techs at the Bigfoot Stage just weren’t ready for this sort of noise and the sound cut out and back more than a few times throwing a major wrench in the mood. Lead vocalist Ezra Koenig took all this in stride and reverted to (or possibly simply went on with their show as planned) a much quieter second half of the set playing mostly off their newest album. Although songs like “Unbelievers” and “Don’t Lie” are wonderfully crafted songs with many layers, the general vibe around the crowd was not a subtle one. Yells of, “TURN IT UP”, and “LET’S GO… GET LOUDER” were as much calls to the band as to the sound technicians. Less than ¾ through their set and more than half the crowd had left to see what all the noise Macklemore was making on the Sasquatch Stage was all about. I was one of those that left feeling, not that I saw a sub-par group perform, but that I just happen to catch a performance meant for a hip club in Brooklyn, not a balls-out festival show.

If anyone out there hasn’t heard the name Macklemore yet, or at least found yourself uncontrollably jumping around to the uber-catchy “Thrift Store”, well, then you would have been severely outnumbered at The Gorge. Ben Haggerty, a.k.a. Macklemore, and his producer, beat-maker extraordinaire Ryan Lewis headlined the main stage on the opening night of Sasquatch and you couldn’t find a more pleased crowd anywhere in the Pacific Northwest! The Seattle based rapper and musician at one point openly stated that he was almost at a loss for words looking out into the crowd because he’d been, “…working [his] whole life to be on this stage, right here, at the Gorge.” Sporting a Seattle SuperSonics jersey, Macklemore lit the stage up, dancing just as hard, if not harder than most of his fans. From the kilt-wearing trumpet player bunny-slippers and all, to the pimped-out fur coats and pinstriped suits onstage, this performance was aimed to please! Once his smash single “Thrift Store” happened, all bets were off as Macklemore cruised out of the sidelines on a scooter with a full wolf-head and fur coat on. And yet, as many are apt to comment, this isn’t a one-trick pony. Not two songs later, Ben Haggerty, alone in the spotlight, spoke candidly about his battle with drugs and alcohol and followed up with the entire second verse, acapella, off “Otherside” just to drive home the reality of the lyrics. Knowing he had this crowd in the palm of his hand, he held on to this intimate moment (shared with 20,000 people) and got the music started for his conversation-starting single, “Same Love”. Listening intently to the lyrics, the entire Gorge shivered simultaneously as the climax of the second verse, and the crux of the argument for gay marriage hits, and Macklemore screams out, “I might not be the same, but that’s not important. No freedom till we’re equal, damn right I support it!”

A great first day with three full days of discovery and nostalgia to come; yes, this Memorial Day weekend is going to be a memorable one indeed.

Check out Chelsea Chernobyl’s photos of Sasquatch 2013 Day One