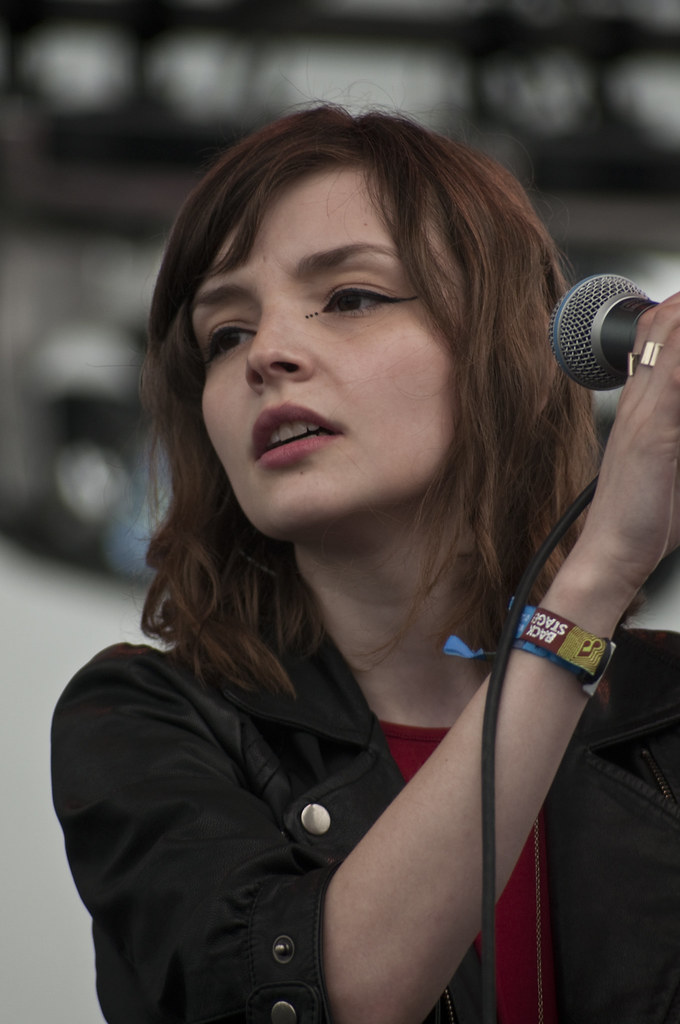 Part of the quintessential festival experience is enjoying the time you get with the random people you meet and, often but not always, the people camping next to you. Don’t get me wrong, it sometimes happen that you’re so terrified of your new camp-mates that you avoid your own tent, but on this weekend, the planets aligned: really though, there was a planetary conjunction visible over the weekend where Venus, Jupiter, and Mercury could be seen near the horizon in the western hemisphere, but the nerd in me digresses. Our tent-neighbours were one of the opening acts on Sunday, Wake Owl, their management team, a group of guys from different parts of Washington State, and a couple who worked for one of the sponsors. All contributed to a spectacular weekend but when it started to rain and the idea of a wet day watching the final day of music seemed not all that important anymore, it’s great neighbours that really motivate those of little faith. Festivals bring together such an unbelievable collection of music from all genres that the place is constantly brimming with anticipation of the next great act. With that in mind, the rain jackets were donned, a beer or two was consumed, and the gates opened for the final day of Sasquatch Music Festival. 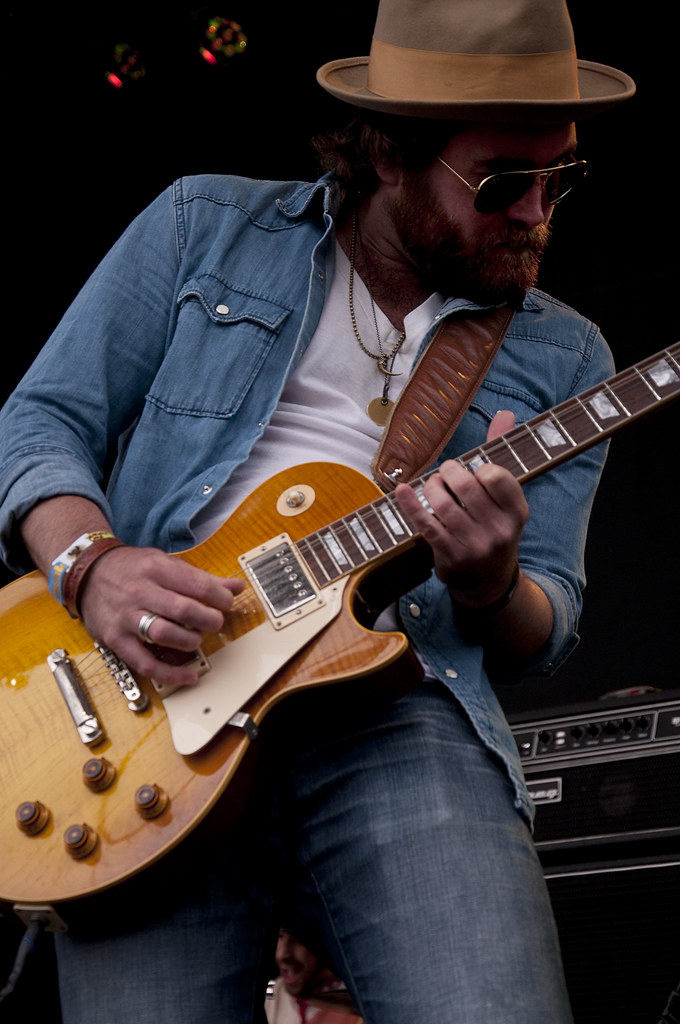 The Nashville based Wild Feathers opened the Yeti stage, and, as per my morning ritual of reviewing and sending off the previous days recap, I was in the Media Area next to said stage. Stepping out onto the (covered) patio, Tyler Burns, Joel King, Ricky Young and Preston Wimberly I witnessed the boys lay done some heavy guitar and impressive vocals making noise enough to fill the bigger stages had they been given the opportunity. Clearly Nashville boys at heart, bits of country, folk, and the occasional hint of the blues they rocked into “Backwoods Company” early in their set and although slowing down the tempo afterwards closed out strong with their single, “The Ceiling” pleasing not just their die-hard fans but a number of strays that found their way to where the loudest sounds were coming from that morning. 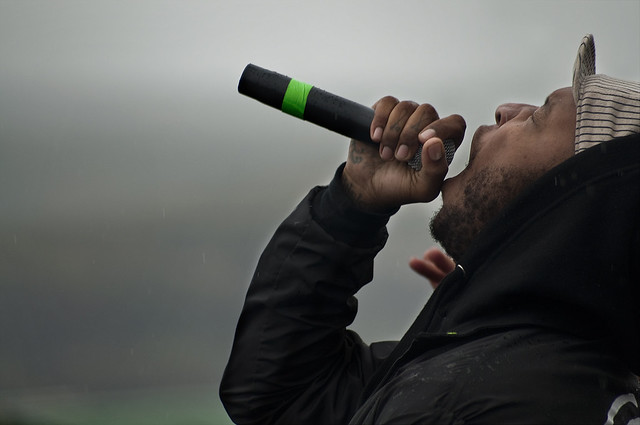 The next act I escaped the shelter of the Media Area for was one of the most surprisingly funny and yet easily one of the hardest hitting shows of the day; Minneapolis based rapper, punk-rocker, musician, and all-around talented guy, Stefon Alexander, better known to most as P.O.S. Charismatic and witty right from the get go you could tell that no matter where this multi-talented man plays a show, there are bound to be hard core fans in attendance. It should be mentioned at this point that the stage had gotten incredibly wet by this point and with the amount of energy P.O.S. was putting out with awkwardly great dance moves, running, and jumping, he had a small slip (literally, although recovering with class) leading to the idea that maybe he was better off, and safer, rapping from IN the crowd! Jumping off stage, he took to the audience, climbing over barriers and moving press and security out of the way and began laying hard into some of his lyrically powerful tracks, at times performing them specifically for different fans that were rapping every word right back at him. He opened with “Bumper”, a dance-inducing track that feels too short only because the groove hits so well and your dance moves are only just beginning, and with some great banter in between songs, launched right into funky-ass track after another including, “Weird Friends”, “Fuck Your Stuff”, and then closing out with “Get Down”. The closer had the largest crowd of the day so far going crazy, dancing with every ounce of energy they had inspiring Stef to show off a new dance move of his own, The Little Cowboy, which, as mentioned before was awkwardly amazing and made twice as great by the fact that he openly admitted afterwards “… I’m a terrible dancer, guys. But sometimes you just gotta dance!” A show that was as much fun as the musical influences behind it were varied, P.O.S. could do no wrong this day and likely created many more of those hard core fans that will no doubt catch everything related to this man (and he has a number of side projects, all worth checking out) anytime he’s within driving distance of them. I had the opportunity to sit down with Stef earlier in the day so be sure to head back here soon to read all about the surprising things this man has planned for the future.

Back on the Yeti Stage, the Canadian folk band The Barr Brothers did everything they could to battle the technical difficulties the rain was creating for sound techs all over the Gorge. Some unfortunate spikes in the audio had them moving away from the mics from time to time but that didn’t stop them from tossing out gem after gem from their debut self-titled album. The opening track of the album made for a great opening track for the set and every knew by the time “Beggar in the Morning” finished that Andrew and Brad Barr, Sarah Page, and Andres Vial weren’t about to let anyone rain on their parade… festival. Sorry. It had to be said at least once. Charging through “Ohh Belle” and “The Devil’s Harp” with great guitar solos, some really talented harmonica used just right, and of course, Page on a massive harp with which she’s classically trained, well, technical difficulties be damned, this group is in it to win it and the folk world better be ready for them because I know I can’t wait for a new album to drop soon (no hints were given, but a boy can hope). 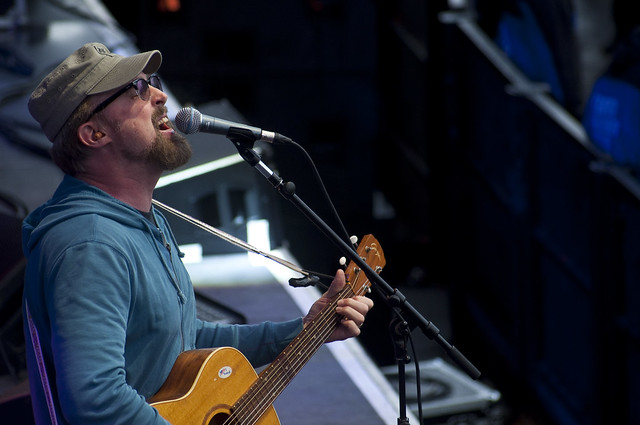 Over on the main stage, although I missed an earlier performance by Imagine Dragons (with an apparently car-sized drum amongst a multitude of percussion instruments), I made sure to catch the always interesting, always weird, and always entertaining Cake. I showed up just as “Love You Madly” began and things you probably can’t even picture began happening all over: Batman danced with a pink gorilla and large men who’ve never done more than tap a toe found themselves twirling and flailing their arms to their heart’s content. And that was just on the lawn, lord knows what was happening in the pit. So I moved into the pit. Frontman John McCrea spoke passionately about releasing their newest album Showroom of Compassion (their sixth) on their own independent label and, “… thanks to the 75 of you that still purchase musical content we did just fine!” Playing a number of new songs including “Long Time” and “Sick of You”, fan participation was not an issue, at one point dividing the audience down the middle and having them sing contrasting lyrics created a symphony of sound that you could tell made every member of this unique group on stage pleased as punch. Although I’m sure the illicit drugs I saw freely being passed around only heightened the experience, these guys put on one wild and wonderful show even for those of us only slightly drunk. With red jeans and a blue hoody, McCrea was completely laid back and at home on the main stage even stating “… what should we play next… since we don’t use a set list, I guess we should figure that out…” then turning around, he clearly discussed just that with the band. Their debut single, recorded back in 1993, “Rock and Roll Lifestyle” was just as satirical and relevant as ever causing a ripple effect of laughter and awkward neighbour checks as the irony of the lyrics set in and many realized they were being politely but poignantly mocked with lines like “… is it you or your parents in this income tax bracket?”. The guys closed with a great country-rock style hit called “Stickshifts and Safety Belts” and I’m sure that when most of the audience came down from their trips they’ll know they just witnessed a classic performance from a timelessly necessary band.

Over on Bigfoot I caught the tail end of the Twin Shadows performance. A group I wasn’t familiar with until walking up to the show I have to say that my first impression (of the three songs I caught) was the feeling that this new wave, American singer/songwriter, George Lewis, Jr., would feel comfortable on any soundtrack from roughly 1982 thru to today. Catchy hooks with a moody, down-tempo vibe leading into synthesized dance beats and falsetto vocals created a feeling of melancholia that has you pinning for a lost love and excited to fall for whoever comes around the corner and into your life next.

With the unfortunate knowledge that I would only be able to catch one last act before having to hit the road home, Alt-J won out over The Lumineers as I’ve had their debut album, An Awesome Wave on repeat for a number of months now and needed to hear this unique new music in person. A couple of moody and hypnotising tracks got their set started as deep purples and moody blues bathed the stage in soft lighting right up to the point a driving beat hit in “Something Good”; one of the many singles causing a stir off the aforementioned album. Although, in all honesty, not a single member of this band looks old enough to drink while visiting the United States, Gwil Sainsbury, Joe Newman, Gus Unger-Hamilton, and Thom Green played an incredibly tight set for a crowd of thousands that couldn’t get enough of the almost technical way that these four perform their idiosyncratic and genre-defying songs. Possibly their biggest single off the album was “Fitzpleasure” and from the first note, everyone in attendance seemed to know what was coming: a sing-a-long to lyrics that most closely resemble gibberish to those unaccustomed to the vocal styling of Newman but that didn’t start from a full out dance party starting and continuous clapping to the entrancing beat. Once their other smash hit, “Breezeblocks” began, the collective minds of the masses had been fully blown and I knew it wasn’t going to get much better; it was time to call it quits.

Although sad to have missed Postal Service‘s festival closing performance, I knew that their incredibly successful, radio friendly (because absolutely everyone I know that’s ever heard it, loves it, regardless of age, sex, or… height?) single “Such Great Heights” (see what I did there…) would’ve been the highlight of the show and sent everyone packing with the knowledge that they were fortunate enough to witness some of the biggest bands in the world come together for another absolutely incredible weekend in The Gorge. The cornucopia of music being played over four days was staggering to say the least and the phrase, “I don’t know how any band is gonna top that performance…” seemed to be screamed out after nearly every show. Highlights you ask? Well, if you ask me, the Brits stole the show this year: Bloc Party, Arctic Monkeys, The XX, Alt-J, and of course Mumford and his Sons. That being said, spending an afternoon chatting with P.O.S. then watching him absolutely take over the festival at the time made one of the biggest impressions on me and was the first story I told when asked the inevitable, “So… how was your weekend” to which, after no thought at all, I could generally surmise with: unforgettable.