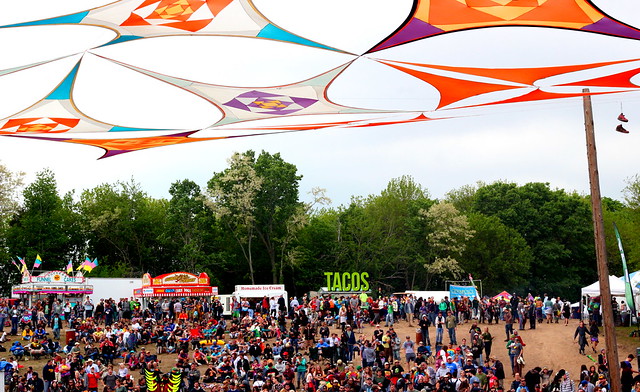 Every year upon leaving Summer Camp there is a strange sense of accomplishment for simply having survived the weekend at Three Sisters Park in Chillicothe, IL.  Last year it was a matter of avoiding dehydration and dust bowl conditions as temperatures neared triple digits.  This year the temperature swung 60 degrees downward, hitting 39 on Thursday night.  By the end of the weekend the chilly Thursday night was a distant memory, overshadowed by the heavy rain that fell Saturday followed by the near monsoon that caused cancellations Sunday night.

That sense of accomplishment is accompanied by an amazement about the amount of fun that can be had despite any downfalls throughout the holiday weekend.  The grounds went from a mud pit to barely manageable Saturday to Sunday, Trey Anastasio’s second set and moe.’s closing set, along with others, were cancelled Sunday night, and for the strangest twist Big Boi blew out his knee shortly into his time leaving the weekend devoid of its hip-hop highlight.  Even so, there is plenty to look back on fondly.  People came out of the gates hot and pre-partied hard on Thursday.  Future Rock and Quixotic welcomed the pre-partiers with incredible sets in the barn.  On Friday the Soulshine tent was home to yoga in the morning and to the Soul Rebels’ hip-hop set by night. Umphrey’s McGee’s Ryan Stasik hosted (and won) the most entertaining kickball game I have ever witnessed at sunrise on Saturday.  Groups started their days at campsites fighting hangovers and retelling the craziness of the night prior.   The campfire somehow never went out and featured a pretty good group jam on Radiohead’s “Creep” at one point. The forest trail was entertaining as always, complete with hooligans hopping on a “SCampoline”.  If I saw anyone without a smile on their face during The Avett Brothers on Sunday it was probably just because their face was covered in mud.  You can’t control the weather, but the attendees of Summer Camp certainly did not let Mother Nature win. 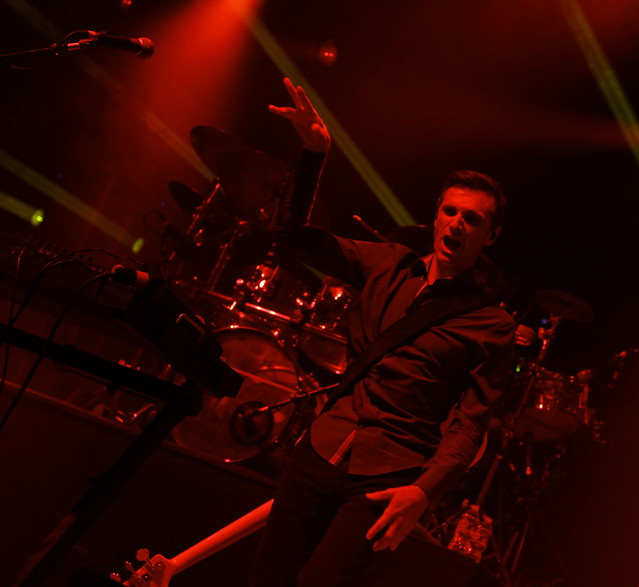 Five of the weekend’s best sets:

“I thought this was supposed to be a big festival,” snickered SFR guitarist/vocalist Nick Panken to the early arriving crowd shortly into band’s time at Thursday’s pre-party.  The folk group is truly a collaborative effort as they alternate lead vocals and spends most of the time huddled around a 360 degree microphone singing with one another.  Along with their instrumental breakdowns the group stomp and jig as hard as any act I’ve come across.  The band continued to complain that Summer Camp only gave them water and not beer.  Luckily, an especially friendly fan up front provided them with Busch Lights, which they promptly shotgunned.  It must have helped because they seemed to be in much better spirits as they stomped through “100 Greenback Dollar Bills” and “No Separation”.

Saturday afternoon the rain had once again picked up but it didn’t seem to matter to the thousands of SCampers that gathered at the Moonshine stage to dance like wild animals to whatever Diplo threw at them.  There’s plenty of electronic music at SCamp but Diplo showed why he’s one of the best in the game with this mix.  Fresh off playing mostly Major Lazer shows for months his time was light on the ML material, with only the Free The Universe highlight “Jah No Partial” popping up.  No one even  seemed to care much when he had a rock star moment and called the festival Summerfest.   The set was heavy on hip-hop (“Dirt Off Your Shoulder”) with plenty of curveballs (Lana Del Rey’s “Summertime Sadness”) thrown in.  A week after having to defend his respect for Daft Punk on social media he busted out three tracks from the robots with “Aerodynamic”, “Get Lucky” and the euphoric moment when he transitioned from “Bass Head” to “Doin’ It Right”.  By the end he was dropping Kanye’s “Clique” shouting “ain’t nobody messing with my Summer Camp clique” and per the usual inviting several ladies on stage to express themselves.

Shortly before 8PM on Saturday Umphrey’s brought the rain with them, or so it seemed when at the moment their set started heavy rain once again returned.  It was seriously impressive that the show was able to go on as a series of tarps were brought out to guard keyboardist Joel Cummins’ moogs from the downpour.  After rocking to this spectacle for 20 minutes we were in need of some warming lasers and got our wish as we arrived just as SAVOY dropped their banger “I’m In Need”.  Despite dealing with their own technical difficulties and Gray Smith having to pull double duty as his usual co-DJ Ben Eberdt was absent for the night the duo version of the group brought the energy when the crowd needed it. The rain seemed to have led to a much too small crowd but those who had braved the elements went hard nonetheless as the group smashed through tracks from their three EPs released in the last year, including the two day old Three Against Nature.  The highlight came near the end with their bouncy remix of the classic “California Dreamin’”.  As cold rain continued to fall images of a sunny California gave at least a moment of imagined warmth.

Halfway through Big Grizmatik’s special set in the Red Barn I realized I was experiencing something that is normally not hard to come by at SCamp.  A good sweat!  After feeling chilly for most of the weekend the Red Barn had been turned into a sweatbox thanks to every person in the building getting down to the grooves of Big Grizmatik’s first ever scheduled set.  After holding down the stages for their own sets Big Gigantic, Griz, and Gramatik joined forces for a funky live electronic show that did not disappoint.  They took turns expanding each other’s songs by adding their own personal touches to the originals.  The best examples of this came with Dom throwing in a sax riff on Gramatik’s “Fist Up” while Gramatik returned the favor with a typically funky guitar riff on top of Big G’s “Fantastic”.   The supergroup set grew even beyond expected proportions when Break Science’s Adam Deitch tagged in on drums for a track.  By the end the only thing curiously missing was a sax duel between Dom and Griz, the latter never even picked his up.  I guess there has to be something to look forward to the next time these guys collaborate to get people sweating.

After a disappointing Sunday night with heavy rain and cancellations threatened to end the festival on a down note the welcomed news came that the final Red Barn show would be taking place.  Thievery Corporation had already delivered one of the weekend’s best sets the day prior.  Their eclectic mix of styles hit the spot once again in the warm confines of the Red Barn.  Although Eric Hilton, half of the base DJ duo, was absent from the shows it didn’t seem to matter much.  Rob Garza acted as a conductor and also joined in on guitar as his skilled band became the center of attention.  The group has the uncanny ability to bounce from one sound to another at a moment’s notice whether it be the hip-hop sound of “Culture of Fear” or the soothing sitar and vocals courtesy of Pam Bricker on the classic “Lebanese Blonde”.  The set was a reminder that whatever hassles were endured throughout the wet and wild weekend were worth it. 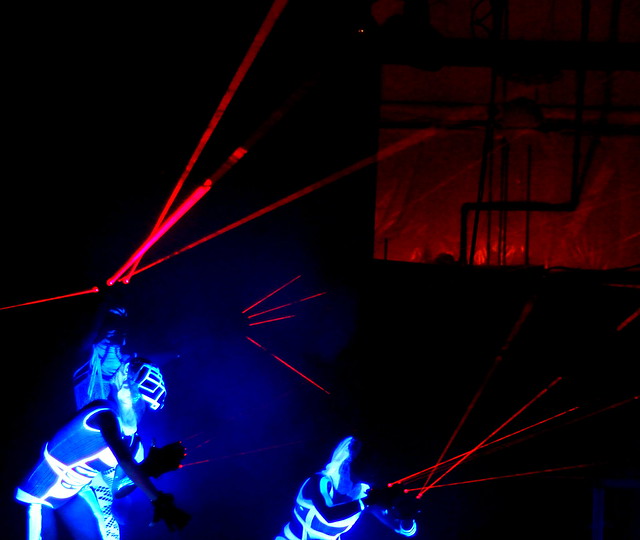