With track titles like “Dirty”, “Doin’ it” and “Take it Off”, American Love leaves little doubt as to its prevailing subject matter. In fact, not once during the album’s half-hour duration do Bad Rabbits take their their eyes off the bootylicious prize, and the resulting orgiastic whirlwind will irritate those genteel listeners who fail to greet it with venereal enthusiasm.

Frustration stems from two sources. First off is the sheer depth of the opening groove; as far as aural seduction goes, “We Can Roll” is less likely to sweep you off your feet than blow your socks off. In the carnal mess that follows, not one track matches the engulfing funk of the opener. Sure, “Can’t Fool Me” provides as good a platform as any for Fredua Boakye’s silky croonage (my god what a range!), but behind the soaring strains of the vocalist, the band does a better job of portraying the potential for virility than the actual thing.

The second, more insidious problem lurks in the lyrics’ nasty streak. If American Love has a subplot, it’s the narrator’s penchant for lovin’em and leavin’em. Perhaps to counterbalance the main focus on sexual heat, Boakye delivers a selection of breakup lines that start to seem distinctly cold-hearted by track 4 and straight-up assholish by track 10. All else aside, the decision to end the album with the lyric “you were my disease” leaves listeners with a taste more of Tiger Woodsish douchebaggery than Gagaesque tainted romance.

The record’s final moment exemplifies the phenomenon plaguing the preceding tracks: in American Love, Bad Rabbits have crafted a series of single-worthy songs which, while united either by thematic design or their lyricist’s singular obsession, do not willingly cohabitate. The same unrelenting energy that keeps partygoers pumped at live gigs ultimately bites the band as they attempt to corral their creations into one record.

Even when the album-craft seems phoned-in, however, Bad Rabbits retain the singular claim to having invented their sound. In addition to skyrocketing the band’s career, the seminal 2009 EP Stick Up Kids constituted a new fusion of funk, hip-hop and electronica, and after arriving at such a winning formula, a group can be forgiven for coasting on past successes. That the band has more potential than their current output is a given; what remains to be seen, however, is whether they will eventually feel inclined to make records based on more than some beefy synth patches and the sensual pipes of one world-class frontman. 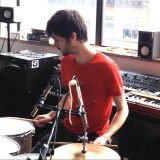 Matt Horrigan is a composer and freelance writer based out of Ottawa, Ontario, Canada.