While the stream of conscious lyrics can be interpreted as careless or lacking in creativity, there is an appealing honesty that outweighs any doubts that this is an art form to be appreciated. Say Anything’s Max Bemis laid the pathway for the open confession rant style and Brian Seller fearlessly travels onward. The band is known for lively, dance-crazed shows which are surely amplified with the stories from the party king at the edge of the stage. Seller and Uychich show us a full sound on Talon of the Hawk that represents a band that is coming into its own.

On the opener “Au Revior,” Seller attempts to give amateur language lessons over the minute-thirty second story of a mutual break-up in which he seems to realize she doesn’t understand his rock and roll ways. There are many metaphors to be drawn out of these lyrics: the couple is speaking different languages; they are not understanding each other’s goodbye’s; she understands him as well as a foreign language. On, “Skeleton” the band confirms that The Front Bottoms get stoned. The guitar hooks are infectious. The oxymoronic title of “Swear to God the Devil Made Me Do It” proves Seller’s wittiness knows no bounds. His confidence in the line “baby, I can spit this game all day” can be felt, though his self-consciousness in the line “but I am full of shit, I’m a plagiarist, as a liar, I’m a ten” makes you feel for him again; a man at battle with his ego.

Lead single, “Twin Sized Bed” is a super catchy rolling ballad that more-so travels to a conclusion but also follows the standard verse chorus cycle present in the typical pop song. The repeating, spacey guitar riff helps the build at the end until the entire audience is screaming about lost love and the mean things our exes have said: “She hopes I’m cursed forever to sleep on a twin sized mattress, in somebody’s attic or basement my whole life, never graduating up in size to add another.” “Santa Monica” shows some expansion with the inclusion of trumpets. “The Feud” is a foot stomping blast, likely to result in many a fast-dancing contest. Seller opts for drawn out choruses to break up his upfront and rambling verses. “Funny You Should Ask” follows suit with a hooky guitar riff and more interesting insights to young adulthood: “I was young and I used to think I have to care about anyone now I’m older and I know that I should.”

As the album progresses, it seems apparent The Front Bottoms prefer to deal with problems on the top of the mind, such as urgent paranoid or yearning thoughts and the need to produce an enjoyable show, thus turning out poppy, danceable songs one after another. They play acoustic guitar like a true rhythmic instrument. Their heart pumping interpretation of music falls between the pop-punk energy of Blink 182 with the stripped down acoustics of Mike Doughty. Though, the attitude is elementary, the poetry is sophisticated. Talon of the Hawk is an admirable effort which shows that longevity is a skill in The Front Bottoms toolbox, and an original dance rock anthem style can be developed in this world of music where it seems like everything has already been done. 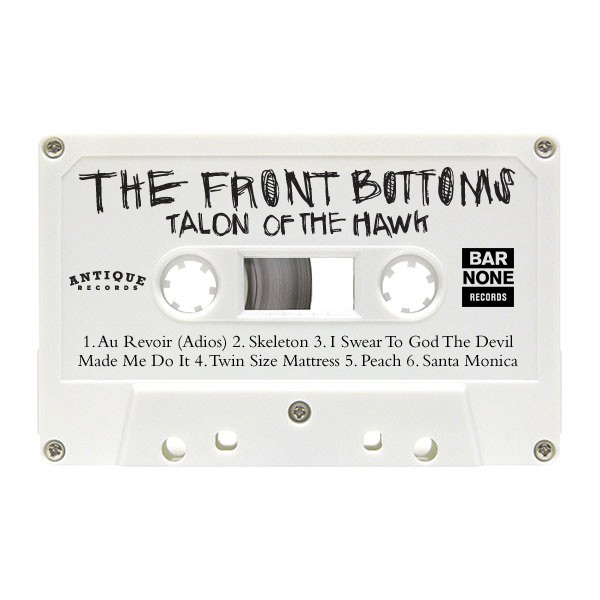