Having just returned from the first segment of his world tour supporting I’ll Sleep When You’re Dead, before departing for the European stretch, and after what he described as more interviews in one month than Elvis had done in his entire life, El-P was kind enough to talk about live hip hop, the hype-machine, and Paula Zahn. 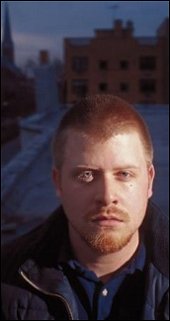 MVRemix: How you feeling? I know you were sick last night.

El-P: Yeah. I’ve been running around like a maniac.

MVRemix: You still out in LA?

El-P: No, no. I just got back last night. MVRemix: Is this part of the tour or what?

El-P: Yeah, it’s the tour. Doing shows – it’s getting serious, you know. We just did six shows, then we go to Europe and then I come back to finish up the tour in the States, so, yeah, it’s officially on.

El-P: It’s great. Incredible. Every show’s been sold out. We’ve taken our whole vibe and presentation way above and beyond what I ever thought was possible.

MVRemix: So the material’s been translating well to the stage?

El-P: It certainly does.

MVRemix: Tell me a little bit about your band.

El-P: It’s great. We’ve got an amazing lighting director, sound man. He does a bunch of projection work. The shit’s ill, man.

MVRemix: This album’s so conceptual in nature. How are you approaching the whole live set-up? Track by track, or are you trying to do the whole album straight-up?

El-P: Well, you know, you pick and choose — what you think are good performance songs. We’re not doing the entire record, but a lot of the record. At this point it’s really cool because I don’t have to do a bunch of old songs from other records. And, I think the way we’re approaching the live show — the theatricality of it — we can just do the new material and get out there with it. You know, it’s definitely a work in progress, but I guarantee it’s unlike any other hip hop show out there.

MVRemix: It’s cool that you’re taking on this whole world tour right now. Do you feel like the live hip hop thing is lacking in general?

El-P: Yeah. I’m trying to destroy that whole idea. Absolutely. I think the problem is people don’t take their shit seriously in hip hop. People don’t have any sense of theatricality. People don’t invest their money into the show. See, in the rock world they say, hey, let’s take all of our money from this show and invest it into the next show.

MVRemix: Just a DJ and an MC…

El-P: And then you go to see a fucking rock show and there’s an intensity.

El-P: It’s just the premise of a hip hop show, and I can’t really say it’s wrong. Most guys are just standing there rapping, and that’s cool and everything, but there are people out there doing much, much crazier shit, so, you know, if you’re trying to compete, you’re losing.

MVRemix: I’m bringing to mind the Mars Volta here. Are you bringing any of those guys, or any of your guests, on stage for this tour?

El-P: Well, no no. The Mars Volta tour put the idea in my head. I mean, when I started hanging out with them and seeing their shows, I was being like ‘Holy shit! How the fuck…’ I mean, the lighting alone… And they were like, ‘we spend every dime on these shows.’ And it made so much sense, because, you know, we’re trying to go somewhere here, but in the hip hop mentality, the indie hip hop mentality everyone’s trying to pinch their pennies so hard, and to me I’m like, look, let me put the fucking money into something that’s gonna step it up a little bit, even if it’s just a little bit.

El-P: If those motherfuckers could just buy a few fucking strobe lights… Anyway, I could talk about it forever, but that’s what I want to do — step it up a notch. You know, it’s a different type of show.

MVRemix: I’ve heard you talk in the past about the whole ‘visceral’ element of music, in terms of your approach to song writing and beat creation, and it seems to play into the live aspect too. Does that sound about right?

El-P: I want to play the music that I can actually lose my god damn mind on stage with. There are only two things in this whole music industry that are actually fun: making records and performing them. The rest is bullshit. I can’t spend two years working on a record and then just come out under some hot white lights. [Laughs] That’s not happening.

MVRemix: Is it nice to get away from your second life of managing the label, for a little while at least?

El-P: Um, yeah, you know, it’s definitely nice. And it’s weird. I’m not, like, use to being self-centered. I’ve forgotten what it feels like to actually, sort of, focus on myself. It’s hard for me, like shit. Even the amount of interviews I do. I mean, it’s like, I’ve probably done more interviews than Elvis has ever done (laughing), like, in the last month. It’s pretty cool. I’m just not use to it. My life in the past five years has been so much more about the cats I care about, helping them get their careers off the ground.

El-P: But I will say that, yeah. It’s nice mostly because I have a piece of art that I’m excited about. And I also feel like, when my records come out, I get to kind of be the prototype of the working ambitions I believe in.

MVRemix: People had been talking about this album for months before it came out. I mean, the hype-machine was huge. How do you think that’s affected the way you’ve approached it? It’s such a personal album, but at the same time you’re forced to be out in the open so much. How does that affect the way you approach the material?

El-P: It doesn’t affect the way I approach the material. The material is created in a vacuum, whether or not people like it. All you can do is make music that you’re proud of, and put everything you have into it. And when you’re done with that bitch, you can put it out, and know in your heart that you used everything you had at the time. Whether or not people like your shit or hate your shit, that’s really not the point. So, it doesn’t change me at all. But am I happy? Of course I’m happy that people are responding to the record the way they are.

MVRemix: Hey, did you see that Paula Zahn thing about a month ago? It was a special called “Hip Hop: Art or Poison?”

El-P: [Laughs] No. I mean this is nothing new. It’s a question that’s been asked ever since white culture found itself faced with black culture. It’s really about fear, like, who the fuck cares if someone’s asking the question of whether or not hip hop is poison? It’s the fact they used that phrase that shows they don’t know what they’re talking about? The question is, why is everyone so shocked that people are fucking reacting right now. I mean, you can only put out one million fucking cocaine booty-rap songs before someone says something about it. And, I hate to say the typical thing — like, what everyone already thinks I think anyway — but I like MC’s, I like rap music, mainstream, underground, fuck — if you’re nasty you’re nasty. So let’s stop pretending that this shit is dope. As far as I’m concerned, the only people who should be doing drug rap music are the Clipse.

El-P: And why, you ask? But you didn’t ask. Because they’re dope MC’s. And they’ve got dope beats. And they’re better than everyone else at it. So, why doesn’t everyone else just go find another style? And people in the mainstream are reacting to this shit because they agree. Intellectually you can see that, of course, it’s kind of wack. And it does have a certain effect that people don’t like. But, that being said, they’re wrong. They’re wrong. They’re only seeing one aspect of it. I think we’re at this point where club music and club culture can again stand up and define what it means to be involved in this. And frankly, they’re going to have to. Once again we’re being asked to explain to everybody in the world who’s looking down through the most distorted lens, “Why exactly is it that we’re supposed to take you seriously? Why exactly is it that this is a positive thing?” And if we can’t answer that question and we can’t look people in the eye, then it’s only our fucking fault.