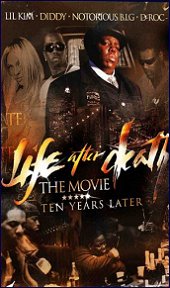 All families have their ups and downs, the good times and the bad, but what happens when the person holding it all together is no longer there? Since Biggie’s death in 1997 the Junior Mafia family slowly began falling apart and drastically collapsed following the Hot 97 shooting and Lil’ Kim’s perjury trial. Director April Maiya looks to capture the decline in her latest documentary Life After Death. After sifting through 100 hours of home videos from Damion “D-Roc” Butler (aka The Invisible Bully), April hopes to show fans the truth about what happens to a family when their foundation is no longer there.

MVRemix: Do you have a lot of work to do before this comes out?

April Maiya: Yeah a lot of to do. As usual a lot of BS with the distributor.

MVRemix: What’s going on with that?

April Maiya: I don’t want to sound like a trite artist, you know, lack of marketing, you know, what every creative person complains about when their project is going to come out.

MVRemix: Are they trying to make changes to the movie?

April Maiya: Lack of marketing, you know. I think every person wants their project to get as much support as possible and have a great relationship with their distributor, and that’s something that comes once in a blue moon.

MVRemix: So whose idea was it to make this movie?

April Maiya: Basically, the man behind the whole project is Damion Butler, I guess people call him D-Roc, he basically, and I think its kind of the worst kept secret in the business that, he has about 100 hours of footage from 1994 to 2003 footage of Biggie, Kim, and just everything that he has ever done. He has the footage kind of as his personal diary and he never shot the footage with the intention of ever putting out to the public and definitely exploiting it to any type of movie form or anything. I knew the tapes existed and I knew a lot of people knew the tapes existed. We’ve been recycling the same images of Biggie for the past ten years, but Damion won’t release any of the tapes, but after the trial of the Hot 97 shooting and Kim’s perjury trial, Damion contacted me and he was kind of upset about the way the fans and the media was kind of spinning what happened. He felt that Kim was looking stupid for lying when she was really just upholding some honor and loyalty. He felt that Lil’ Cease was running around telling people in the media that he didn’t tell the Feds anything that they didn’t know. He [D-Roc] kind of felt that he wanted to set the record straight, not just from his opinion but facts, footage, facts from discovery. Discovery is what the Feds give you after they convicted you, they give you a box of all the evidence they used to convict you. [*Editors note – Discovery is sent by the Government after an indictment]. So I think before he [D-Roc] went into jail, he’s in jail for this thing, he gave possession or ownership of the tapes to his mother.

MVRemix: Okay. When does Damion finish his sentence?

April Maiya: He is going to want to keep that a secret.

April Maiya: But if you could just put out that he will be out shortly, that would be great.