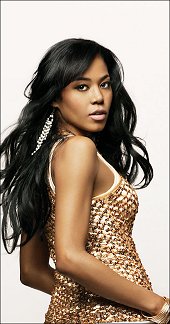 MVRemix: What was it that brought you to sing instead of to pursue your writing aspirations/begin a small publishing business?

Amerie: I don’t know. I think I was in my last year of high school and I just had a feeling that that was what I was supposed to do. [pause] It’s really weird and it’s kind of hard to explain because I was always academically inclined and more into that stuff. Anyone would have probably thought that I would try to be a professor or a lawyer or a writer or something like that, and I’d been writing for so long. But also I’d been doing talent shows and things like that as well. As a senior in high school I just felt like “Wow, that’s really, really what I want to do.” But I went to college and still pursued my studies also at the same time pursuing a career in music. I still want to write as well.

MVRemix: How did you learn how to sing?

Amerie: I always sang. My mother sings, so that’s something I always did. As far as practicing when I was growing up, I always listened to the radio and tried to do everything that they would do on the radio. So, even if it wasn’t really my personal style of singing I would just try to work my voice to try to get it to do different things; strengthen my voice, things like that.

The raspy-ness in my voice – because I do have a raspy quality as times… I think I can pinpoint when that happened. I’m pretty sure it was my junior year of high school (I played sports – I played Basketball) and it was so weird because I never ever would get raspy, but I lost my voice for almost a week. It was because there was a Basketball tournament on, and… I was a Tomboy at the time. Anyway, I was doing a lot of yelling (everybody was doing a lot of yelling) and I was screaming and screaming so much, and at the time I didn’t really think during those times about protecting my voice and things like that. You know, you’re young and you think “Oh, it’s just there,” you don’t have to do anything special for it – like take care of it, heh. But ever since that time there would be a rasp quality to it. I think I kind of messed it up [chuckles] Or something. I’m glad it did, because it does give it it’s distinctive quality.

It’s like 50. 50 Cent has a very distinctive voice, but it’s more so distinctive after he went through the accident. I guess someone shot him. It kind of changed his voice, but it actually made it so you really know it’s him now when you hear it. It’s weird how things can happen like that.

MVRemix: Tell me about “Touch.”

Amerie: Well, the record was produced by Lil Jon and the point of the song is just it’s a sexy song. The hook is “Don’t be afraid to touch, I know you think I’m a good girl.” The reason why I wrote that was because I didn’t realize ’til a year and a half, maybe a couple of years afterwards; really until I started getting into making this new album that the impression that most people had of me based on the first album was a “round the way” girl. Really nice, sweet, cute and very goody-goody. That’s not all fake, but that’s all so single faceted. And the first time around I really didn’t talk about anything sensual or sexual. I stuck to the emotional side of relationships rather than the physical things. But I went “Wow!” It’s funny how people have this slanted view of me, but it wasn’t just because of music.

Even in high school growing up, people always had this one-sided view of me which was Amerie’s always happy, she’s always smiling and she’s goody-goody and that’s it. My closest friends knew that was a side of me but they’d also seen me upset, sad, angry; they just got to see more of who I am. So with this project I felt I’m ready to reveal a little more of myself this time. Last time I did a song about letting a guy know on a small scale that hey, you should be more confident. Don’t be afraid to really take it there with me because you assume that I’m like “this,” but you don’t really know me well.

The reason why I titled the album “Touch” is because of that. I wanted to get people to see different sides of me and to just open up a little more myself; talk about the sexier stuff that I didn’t talk about last time because I didn’t feel like it.