These are the transcripts of an interview with Slug. The interview was conducted by Hugo on September 9th, 2002. Slug is a well established independent artist, who heads Atmosphere. He has worked with Anticon, the Molemen, El-P and many other well respected artists. 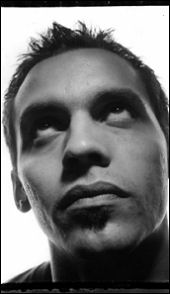 MVRemix: Are major labels gunning for you and you’re ignoring them or is your goal for Rhymesayers to blow up on their own?

Slug: I mean, I’m doing this because I’ve got a new record and because I like to tour and I’m bringing other Rhymesayers artists out. Because its become a doorway for me, now that I’ve been able to get out there and pitch to different communities, it’s a way for me to introduce my brethren to my fans. But no, we’re not touring to try to get on a larger label n’ all. I mean that’s not really my interest. If someone makes me a stupid offer that I can’t turn down, I’m sure I’d give it some thought. But, I’m not going to ever put any work into attempting to be on a larger label. As it happens I got to do it without even having to work at it, haha.

MVRemix: What’s your view on your audience?

Slug: I mean, I think it’s probably…sociologically speaking it’s the same as my view on life or on the population in general. Most of them are probably just as lost and confused as lost and confused or found or focused as I am on any given day. Boys, I want them to buy the CD’s and play them for their girls. Girls, I want them to buy the CD’s just so they’ll make out with me. Just like everybody else.

MVRemix: Have you experimented much with drugs?

Slug: Have, not lately, but as a kid. I, you know…did a few things. But, I’ve never sniffed anything in my life. I’ve never done cocaine or speed or meth or any of that kind of shit. But in high school, I think I swallowed acid a couple of times. Ate mushrooms too, but, I outgrew that. All when I was a kid, I just don’t really want to experiment too much with that now. I did try ecstasy a few times over the last couple of years. But, I wouldn’t really suggest that to anybody. That shit was so funny that I have to respect the power of it. Pretty much, solely people get caught up with doing that shit a lot, because it’s just that fun. Anything that’s that fun, you’ve got to take for granted that there’s a trade off there. You’re giving up something in order to have that much fun, and I just don’t know if I’m prepared to give up anything to have that much fun. I’m not really into having a lot of fun, I kind of like being moody and brooding, pissed off and stuff like that.

MVRemix: Why haven’t you caved in and left Minneapolis for Chicago or New York?

Slug: Most of all because my family is in Minneapolis. I grew up there, there’s my mom, my brothers, and I have a son there. I’m not really trying to leave my family, I love Hip Hop, but, I love my family more. Plus I always felt that if you can’t do it in your own city, if you can’t accomplish your goals with the people who you worked with or grew up with. What makes you think you’re go into some alien scene and network your way up. That seems so strategic that I don’t really believe in the truth behind it. I’ve never really been one of those guys that thought “Well, if I lived in New York…” Face it, I’m in a city where I’m one of nearly three hundred rappers. I could move to New York and be one of three million? At least this way, I have more of a chance of clawing my way to the top.

MVRemix: A rapper who’s a mutual friend of ours told me recently that you’re light skinned black. Is this true?

Slug: Hahaha. I mean I’m mixed, you know. It’s kind of like, especially in America if you’ve got a little bit of black in you, when the revolution comes, you’re probably gonna get killed just like the rest of the blacks. So, under that guise group…My mother’s white and my father is black/native American. So, it makes me really light skinned. Most people think that I’m Italian or a very tall Spanish kid. Just by looking at me, you can’t really tell by my skin or my hair. But, girls always say that my features look like I’m not white. I don’t know, you know what, lets not talk about that kind of stuff.

MVRemix: Have disgruntled fans ever poured or thrown salt on you thinking you really were a slug?

MVRemix: A lot of your material has been heavily bootlegged. Do you bootleg much yourself?

Slug: I used to bootleg lots of stuff. Just to give stuff to kids who I knew were doing trading and whatnot like that. Because, if I give you a 90 minute tape full of shit that I’m never gonna release. You have to bring me back a 90 minute tape full of shit that I can’t get. So I basically used to take my shit and trade it off. That’s how I really discovered people like Moka Only, or even Company Flow. I first heard them through tapes that I had gathered through trading off my tapes.

MVRemix: What is it about Christina Ricci that is so attractive to you?

Slug: I guess just the whole package, dude. I know she’s considerably homely to most people, but I’ve always kind of liked that kind of look. I like girls that are awkward looking and whatnot. Her whole package man, her vibe, her appearance, her money. Errr, I’m just kidding about the money part.

Slug: Yeah, haha, just the whole package. Plus I heard she’s a little bit of an art buff, and I like those girls because they’ve got lots of issues and they like to argue.

MVRemix: Is the “Woman With the Tattooed Hands” in any way real or solely a fictitious track?

Slug: I mean it’s fictitious; it’s a metaphor for that same old shit that everybody has already made songs about. Just trying to find your place within a belief and faith as well as people that you want to have sex with.

MVRemix: Who would you diss if you had the opportunity to do so right now?

Slug: The Rolling Stones…nah, fuck that – Led Zepplin. I would diss the fuck out of Led Zepplin. Fuckin’ biters dude, they didn’t bite my shit, but in the name of every fucking blues artist that was making music in the early 60’s, down in the Delta. Fuck Led Zepplin!

MVRemix: If you weren’t a rapper what would you be doing?

MVRemix: What are you currently working on/have soon to be released?

Slug: Um, ejaculation. Right now I’m just writing, finishing up ‘Se7ens Travels’ and writing for the next release. And, I’m working on a DVD that I might end up releasing, or I might not. I don’t know. I’m in a good place right now because I have the freedom to spend my time working on whatever I want to work on. I set my year up pretty good.

MVRemix: What exactly is the Christina Ricci tribute album?

Slug: It’s a record me and Murs did as a tribute to her.

Slug: Please brush your teeth before you attempt to kiss me.

AWSOME. SLUGs got the sickest flo

DUDE said he would diss ZEPPELIN AND THE STONES for jocking BLUES LMAO… Would he diss the Blues players for jocking COUNTRY AND WESTERN RIFFS?  Of Course he wouldnt because dude knows nothing about any music involving an instrument apparently
To be blatantly honest I’ve not heard much from Atmosphere,  but from what i’ve heard so far,  it’s nice beats being ruined by a bad rapper.  I see comparisons of him between Eminem,  and I don’t see it,  because they are both white?  One is a good rapper with skills and interesting shit to say and the other pretends to be pissed off at the most mundane of shit.
I suppose thats why Andy Sandberg of Saturday Night Live pretty much summed up Slug in the song “I THREW IT ON THE GROUND”

lol reality_checker you do realize that what he is saying is that Led Zeppelin actually stole a lot of their riffs and even some of their lyrics plus it was also pretty common for them to release songs on their records that were covers of older artists but they never gave credit. I would diss zeppelin on that too I don’t care how good you are you don’t just rip people off.