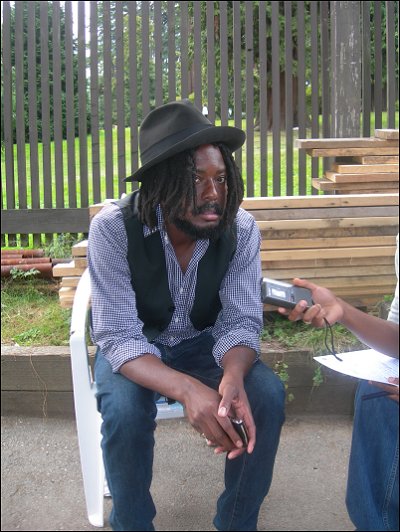 Earlier this year Kheaven Brereton opened his heart and soul to all those that attended his performance at the Malkin Bowl venue in Vancouver’s Stanley Park. The performance was not like most shows seen in the city and was reminiscent of Hip-Hop concerts back in the day. Brereton, better know to everyone in the music world as K-OS, is one of Canada’s better-known hip-hop/soul artists. He is constantly on a mission to guide music towards what it should be, original. Before his performance K-OS took a few minutes to open up to MVRemix on his thoughts about music, love and life.

K-OS: “I’m a soul man that happens to make music”

MVRemix: How would you explain your music to anyone who has never heard it before?

MVRemix: All your albums have kept that originality that you are known for, but each album you put out has definitely evolved from the previous one. Can you tell us what you think the difference is between your albums, Joyful Rebellion and Atlantis: Hymns for Disco, how have you evolved?

K-OS: Just a guy who wants to have more fun, and instead of taking the issues of the world seriously to heart everyday and every moment of his life, still taking those issues to heart and having fun with the life I have been given, and using music to have fun and address those issues in a more subversive poetic way then to talk about how fucked up shit is. There is something to be said for that also, but I think that subversive text in art and poetry is deeper, where someone will look at it and say there is no message because it’s not overt, sometimes it’s more poignant when it’s more covert. And this album reeks of undertones of everything I’ve ever talked about but in a more relaxed way, I think, in my opinion.

MVRemix: Love has played a major part in many of your songs. On the subject of love, relationships and past experiences, how much of your experiences with love do you let influence your music and why?

K-OS: I mean on this record it’s a major influence, mostly because on my first record I had a girlfriend of three years, and we broke up right before the album was finished, and I’ve only really started to get over it on this record, which is seven years later, so this is the first time in my life that I’m actually open to not perceiving my life as someone who’s a broken hearted person, or a victim, not necessarily that I even knew that but I think sometimes we walk around with ideas of ourselves that we don’t know, and now on this record I was fully confronted because when I started making music I was happier to address those issues, like the Rain or Sunday morning, to see that “hey, I‘ve been walking around thinking of my self in that way when I don’t even want to be that person anymore.” Love has started the evolution, which was the first record, and it’s bringing to an end a section where I don’t look at myself anymore as a person whose heart was broken but instead as someone who is set free to have many other experiences in life.

MVRemix: Being form the east coast of Canada and having connections to the west coast as well would you agree that having a connection to two different Canadian lifestyles makes you that much more knowledgeable when it comes to making your type of music?

K-OS: Yes, it’s amazing (Canada), As any musician who ends up representing their nation weather it’s Bob Dylan, Neil Young, Maestro –Fresh Wes, those guys travel the country. I spent time in Nova Scotia, I spent time in Montreal, I think I get a clearer viewpoint of what Canada is all about, by hanging out in different places in Canada, because Canadians are the same generally on the surface, but every place has it’s own accent. So yeah the fact that my band lives in Vancouver and there are mountains here and it’s very natural here, people aren’t stressed, no worries. In Toronto you need to know what’s the latest in the magazines, what song is out. I usually come out and sing a song like Crucial (Which was made out here), or Crabbuckkit, which was made in T-dot. It just depends ya know?

MVRemix: Fans are wondering what you been up to when not touring. Are you currently working on new material or any other new projects?

K-OS: At this point I am just enjoying this record, cause there was a lot of labour put into it and record companies have a certain amount of cycle for a record, cause they have a certain amount of money to spend on a record, so basically when your favourite artist moves onto another record, sometimes, I shouldn’t even make that generalization, but a lot of times the reason artists move on and start making another record it is because their budget is depleted and they can open up a new budget and start making a new record.
[laughs] and I am pretty much at that point, especially because the way the music industry works today, but I am not really using that as a key this time to go make a record. Now I’m not working on another record until this is completely out of my system, and I feel like I’m just getting started, because there are so many songs on this album that can be released I can perform live or would like to make videos for. And when I make a next record this time it’s hopefully going to be over the span of a longer time and without any preconceived idea of anything I’m gonna do.

MVRemix: What’s the difference between performing in a place like Vancouver, as opposed to cities like Montreal or Toronto?

K-OS: In Vancouver people have the image of being people who smoke more weed, and are much more free. That alone affects how we perform and there is also a deep paranoia that accompanies smoking weed, so it’s that type of vibe. In Toronto they have seen everything, they’ve seen the circus, they stare, they watch. Just because a Toronto crowd is not moving, it doesn’t mean they’re not feeling you, it means they’re checking you out, everything from your fashion to your style, to how you’re moving on stage. In Montreal it’s pretty much the type of audience that if you stop singing a song they might just continue singing the song and clapping their hands, until you have to change what your doing to what they are doing, cause they are so into it they start dancing singing and being so celebratory that you got to be like “I guess I should go with them then.” [laughs] They lead the way they ain’t at all afraid to get with something new, if you wanna play a new song they’d be down to hear it, they are about forward thinking art wise.

MVRemix: Anything you’d like to tell your Vancouver fans?

K-OS: Umm I’m cool man, I love Vancouver, I am glad it’s not raining, but let’s not speak yet. I did two sold out shows here a while back, but now my life is a whole lot different. I didn’t really get to enjoy it at first, and I been walking back here now and realizing I didn’t realize what things looked like, I was so in a frenzy that I didn’t stop to see any of the writing on the wall, and now my mind is much more clear so now I’m like “wow” it’s cool to come back with people still knowing of my music and who are still excited about hearing it. But the hype has all evaporated into admiration and respect, hopefully now I can be a bit calmer about how I approach it. So that’s the best part about coming back and playing here, it is a place I will keep visiting for as long as I play music.