2011 has already been a big year for Royce Da 5’9”. After releasing the Slaughterhouse EP with his group Slaughterhouse in February and Hell: the Sequel with Eminem in June, the Detroit rapper has emerged once again, this time bestowing upon us another solo project. Success is Certain is Royce’s fifth solo album, and after a solid period of collaborations, he has made sure his own voice will be heard. Success is Certain gives Royce another chance to shine on a record all his own, and to solidify himself within the hardcore rap community as a force to be reckoned with.

Success is Certain begins with the track “Legendary” which features Travis Barker of Blink-182 on the drums. It seems a fitting title for the first track, as it paves the way for the rest of the record whereby Royce generally claims superiority over the rap game. Everything about “Legendary” is in fact legendary; the beat and accompanying percussion are booming, the lyrics are triumphant and biting. In the first verse, Royce spits, “To say that I’ve evolved/There’s only one ‘I’ in defying odds”— it’s been a long and trying, yet critically acclaimed career for Royce, and he’s not shy about talking about it.

In other posts I have found fault with hip-hop that is flashy for no other reason than being flashy, or rap that is nothing more than an excessive exhibition of wealth. I’ve even been called a “rap purist” – which, albeit off the mark, I think implies that I’m pretentious with my choices of rap. I’ll admit that I expect a greater purpose from most everything I listen to. And I will also admit that I’ve criticized certain rappers’ arrogant swagger. But the difference between a rapper like, say, Kanye, and Royce da 5’9″ is Royce somehow masters the art of braggadocio without crossing a line into outright indulgence. Even though it’s laced with self-vanity, the line, “Somebody very dear to me just attempted to kill herself/And showed me we don’t fear death, we fear fear itself/Ever since 98 in hip hop my presence been felt/Couple dollars, couple models, couple of bitch niggas under my belt” from the track “I’ve Been Up, I’ve Been Down” feels markedly more poignant than arrogant.

The most impressive aspect of Success is Certain, though, is that Royce is joined by numerous guests on the album, yet he maintains a strong and masterful voice that weaves its way throughout. Even though Eminem (once Royce’s mentor) guest raps on the song “Writer’s Block,” Royce commands most of the verses – almost as if the master has finally stepped back to let his protégé triumph.

It’s clear that Royce has been instrumental in each and every track on Success is Certain, and in the process he’s put together a solid, coherent representation of his own skill. Which is certainly a success, if you ask me. 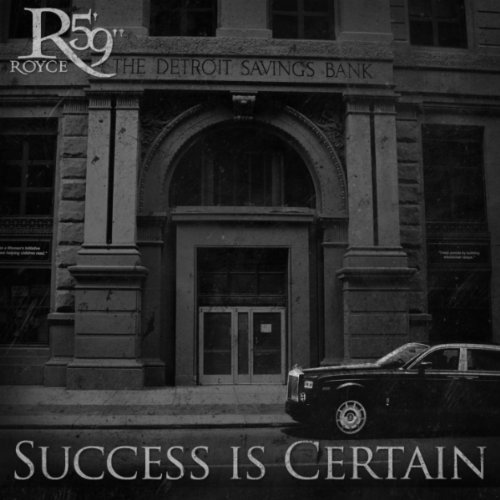 One reply on “Royce da 5’9″- Success is Certain review”