Black Rob needs no introduction to the hip hop game; having been a part of it since the ’90s, Black Rob has come up a long way since his debut album, Life Story. Even though a few jail sentences kept him occupied for some time, Black Rob has returned back to the scene with Game Tested, Streets Approved, an album that is explosive, raw and a great way to welcome Rob back at what he does best: rap.

“Welcome Back” says it all in the title; behind eerie sounds and blaring trumpets is the confident Black Rob, banging his chest as he acknowledges his return.

“Can’t Make It In NY” is a description of many events that have occurred in Black Rob’s life in NY, over minimalist beats and sounds.

“Celebration” is the feel-good track off of the album as Black Rob illustrates a picture about having a good time. “Nobody home, everybody in the streets,” says Black Rob, his deep delivery backed by Breyan Isaac’s soulful voice.

“Get Involved” has Black Rob rapping about his luxurious life, talking about different places he has frequented. The piano melody is enjoyable, remaining eerie enough to suit Black Rob’s delivery.

If you had any doubts that Black Rob had gone soft, “No Fear” will get rid of that skepticism; heavy, piano-thumping production and Rob rapping about holding people up, prove that Black Rob has not become timid at all.

“Nothin” ends the album off right with Black Rob prophesying his return to hip hop, while also providing rhymes that still show he is one of raps most fearless artists.

Game Tested, Streets Approved is a strong return for Black Rob; he retains his hard, unflinching swagger, delivering blows that will not go unheard, attacking your ear canals with no remorse. No eerie, creepy production is minimal, but creates the right atmosphere for the album. If you want to listen to an album that is unyielding and never hesitant at getting a certain point across, then Black Rob’s Game Tested, Streets Approved is the album for you. 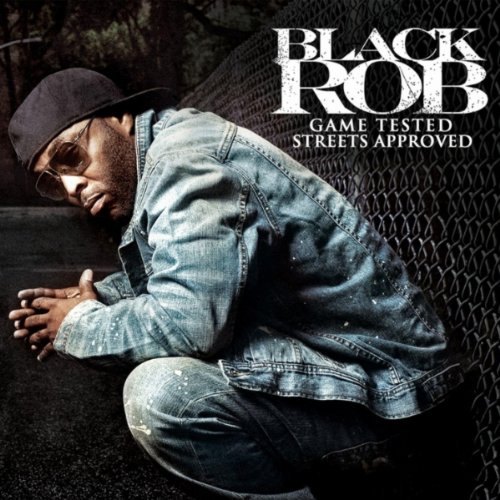