We all love a good come-up story. Like the one about P. Diddy’s rise to global fame from his humble beginnings in Harlem; or the one about Notorious B.I.G. selling drugs to get by and ending up one of the most respected rappers of our time. The most glorious come-ups though, in my humble opinion, happen when talented and influential rappers find validation within the rap community by saying what’s real without pandering to a mass, over-hyped audience and without selling out. That’s where Los Angeles rapper Jay Rock comes in.

Jay Rock’s first studio album Follow Me Home is a chronicle of struggle and adversity, a memoir of sorts, one that shows the rapper/producer hasn’t forgotten his roots. As of late Jay Rock has been making his way toward the top of the rap industry, having been a part of collaborations with Lil’ Wayne, Twista, and Tech N9ne, as well as having been featured in XXL. Follow Me Home is Jay Rock’s first major flirtation with the spotlight, and, fame in mind, it’s interesting to discover he takes us right back to where he began. Follow Me Home is almost Jay Rock’s way of assuring his listeners, “Yeah, this is where I am now, but come with me and I’ll show you exactly where I’ve been.” It’s as if we’re following him back to his neighborhood, back to the housing projects he grew up in, and he’s showing us he hasn’t forgotten about any of it.

Aptly titled, the track “No Joke” demonstrates Jay Rock’s knowledge of the inner workings of the streets. He grew up in Watts, California, a Southeast part of Los Angeles, and was a member of a gang called the Bounty Hunters. Rock is no stranger to guns, or drugs, for example, as he demonstrates with the line “Homie what you smokin’ on?/I can get it dirt cheap/I can get it for the low/Hard rock or pure blow/I can show you how to whip it .” Likewise, it’s still blaringly clear that Rock remembers the things he had to do to survive before hitting it semi big in the rap game. In the song “Just Like Me” Rock spits a tribute to his hustling days – “Serving them junkies just to get some quick cash/To give to your mama ‘cause she doing bad.”

If one thing is clear about Jay Rock, it’s that he consistently spits verses that are informed with life experience and backed by hard-earned street credentials. However that’s not the only admirable aspect of Follow Me Home – not only does Rock manage to tell his “hood tales” with depth, he also produces some sick beats that serve to only enhance the essence of those stories. “Say Wassup” begins with a fairytale-inspired melody and continues into a bass-heavy, rhythmically perfect track about getting out of the hood, going back, and still saying “what’s up” to old homies. It’s the perfect anthem to bump in a particularly nostalgic moment.

But even though Jay Rock may have found his ticket out of the hood with Follow Me Home, his music continues to stay about the struggle. Soon we may see him riding in Benz’s, but we’re forever going to hear him rapping about the streets. 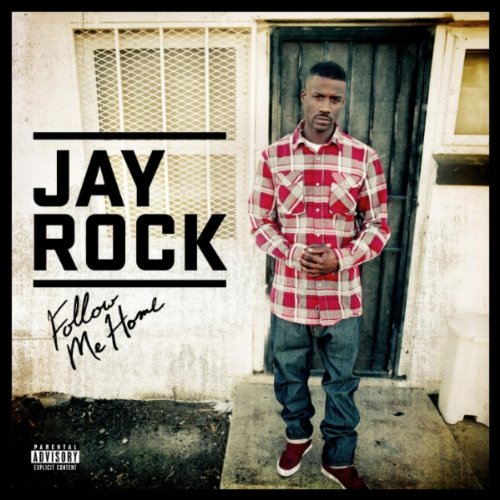 One reply on “Jay Rock – Follow Me Home album review”