As a 34 year old who grew up in arguably one of the best eras hip hop has to offer I don’t get excited about the music these days but I still plod on in search of that excellence. Albums and expectations come and go, it’s been a long time since they were last exceeded. While most hip hop fans have been Watching the Throne this year they should have kept their eye on the Gold Chain with Ugly Ducklings fifth Long Player ‘Moving at breakneck speed’. The 3 man team proclaimed their love for hip hop on the opening track of their last album ‘Audacity’ when they said ‘I won’t let it die’ and after listening to this album they meant business!

We first heard UD when they dropped Fresh Mode back in 1998, it was a time I was still writing full time for this very website and the independent scene was flourishing. When they followed that up with ‘Everybody C’mon’ it cemented my love for their infectious hooks and throwback B-Boy rhymes over that warm timeless production.

The album is themed and plays out as an adventure story which unfolds with each track glued together by skits in the same way that 2003’s ‘Taste the Secret’ was. In an almost cinematic style they are trying to out run a gang who are keen to put an end to ‘Yudee!’ but the trio are always one step ahead, but only just. Andy Cooper & Dizzy Dustin return to wax to trade amusing verses and naturally bounce off each over the production and turntablism laid down my DJ/Producer, Young Einstein.

The sequencing on this album is top notch as it opens with ‘Keep Moving’, a track that musically picks up where ‘La Revolucion’ left off. This is how album intros are supposed to be by capturing your attention and imagination from the start. As the chase begins an infectious Mexican horn section triumphantly pumps out as Andy Cooper and Dizzy Dustin proudly announce ‘Party people hold onto your hats/ Ugly Ducklings coming back and we’re making big tracks/ No time to be timid/Better pick up the pace/ I’ma take it to the limit/Do whatever it takes’. It leaves you wanting more but before you can hit the back button to hear it all again they come flying at you with ‘Momentum’. The track has the signature Ugly Duckling sound we have come to expect which is also present on tracks such as the lead single ‘Elevation’ and ‘Run for the light’ where even Young Einstein spits a couple of lines.

The trio want the listener to be a part of every experience whether it’s taking you through a catalogue of global failed romances on ‘I wonder where she is now’ or reminiscing about the good old days on ‘How it used to be’. The latter oozes nostalgia and will hit a chord with anyone like myself who craves the good times in hip hop again. It’s a poignant verse from Diz : ‘I hear life gets better with age/but the older I am, the smaller the cage/I’m trapped and I wanna get loose and free… and get back to the way it used to be’.

‘Sprint’ is a high BPM throwback track that sounds like it could have been recorded in ’88, if it wasn’t for the reference to Usain Bolt you probably wouldn’t know any different. Diz and Andy rapidly fire lyrics back and forth leaving you out of breath while demonstrating an even faster delivery than they brought on the tongue twisting ‘Left Behind’ from the ‘Bang for the Buck’ album.

Young Einstein has really pulled out all the stops on the production; no one has been digging in the crates harder than this since about 1993. Handling the production duties he works the samples, constantly switching the loops up within the track to give the listener that extra dimension as Diz and Andy move back and forth and into the scenario’s they create.

Whilst most producers would make a beat that may change up for the hook, ‘Stein decorates the beat from beginning to end to match the words being said. There is no better example than this on ‘Anything Can Happen (in the big city)’, we’re treated to a stripped down boom bap drum intro as it breaks down into a jazzy horn riff as each emcee goes back and forth about a trip to the big smoke. With the sound effects setting the scene, these two emcees demonstrate the essence of what hip hop is all about, clever wordplay and cool delivery without taking themselves too seriously. There’s also a piece of the story towards the end that makes you smile, as by coincidence, Diz and Andy stumble upon each other just at the right time.

But let’s not forget that Einstein is also an amazing Scratch DJ and as usual he gets his own track, this time being ‘Einstein Buys a Monkey’, a tripped out instrumental piece that cuts up samples and vocal sound bites over a rambling organ.

‘Endless Summer’ rounds off the album perfectly, a laid back guitar lick carries UD to their own utopia, and you can almost smell the atmosphere as each emcee effortlessly writes you a lyrical postcard. The track doesn’t need a complicated hook, a chilled out Jazzy Sax does what it needs to and Andy paints a blissful backdrop: ‘Safe and calm / a Trademan shakes the palm / I’m encased on a Lawn getting baked to Bronze/ Smiling while I laze in the UV rays / Forget about the haze and the gloomy days ‘.

It’s truly an achievement these days to buck the trend and take you back to an era when it wasn’t important who did what and who was the high profile guest, it was about the music itself. And that’s where Ugly Duckling has succeeded with ‘Moving at Breakneck Speed’, they have put their all into creating what I can only describe as a classic. I felt a huge smile on my face appear as this album came to an end the album had been seamlessly woven together into a story that pieced together like your best Lego set.

A classic can only be really measured by its replay value, this album hasn’t left my eardrums since its first listen and it doesn’t look like its going to run out of steam anytime soon. ‘Moving at breakneck speed’ is easily the best hip hop album of 2011, period. 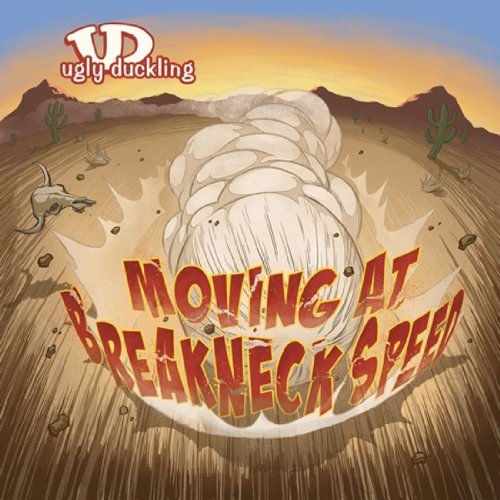